After more than a year of nothing going on skate wise and related events, the first FDR Ladies Jam came as a breath of fresh air. Once I heard about it I got the crew (husband and daughter) ready for the red eye from Seattle, WA to JFK. Upon arrival to FDR, and seeing the local ladies and crew painting and getting everything ready for the event, I felt the stoke getting ready for a great weekend. Sure enough, the Ladies Jam did not come short. Bands, vendors, and the girls shredding made it an epic day and it goes to show that shredhers are here to stay. Can’t wait for the next one!! Thanks to all the lady shredders for making this happen!

All the photos shot by Olga & here’s an interview with one of the main organizers of the Ladies Jam, Gloria Haag:

How did the FDR Ladies Jam come to be?

The amount of women skating at FDR has really grown in the last five years. At the last Sober vs Wasted, I wanted to sponsor a ladies heat. It just wasn’t fitting for that event so Ryps suggested we do our own ladies event in the spring. She has a lot of fire in her for skating and brought that competitive side to the event. If it wasn’t for her, we wouldn’t have had the competition. Once she said the contest was a go, I started lining up art vendors. I am really passionate about the arts and wanted that to be included in the event. I have been working on building a brand called “Shredher” that combines my passion for art and skateboarding. It’s geared towards helping promote, inspire, and grow the girls skateboard community here in Philadelphia.

Lauren then began lining up bands. She is in a band called Trash Knife, and took care of organizing the music and getting all the necessary equipment down to the park with the help of Ricky Jr. Mind you there are no outlets down there, so it was a lot of work. Ryps and Alyssa got busy working on a flyer. Ryps and I reached out to sponsors and local skate shops. Lauren built the “Gnar Bar” on site and I painted the bowl with wild ponies and flaming rainbows in 24 hours. We lined up some amazing women to judge the event; Shannon Smith, Stephanie Murdock, Jean Rusen, and Andrea Bethke. Joey P and Bud Baum were the MC’s. It was an awesome collaboration and a lot of planning. 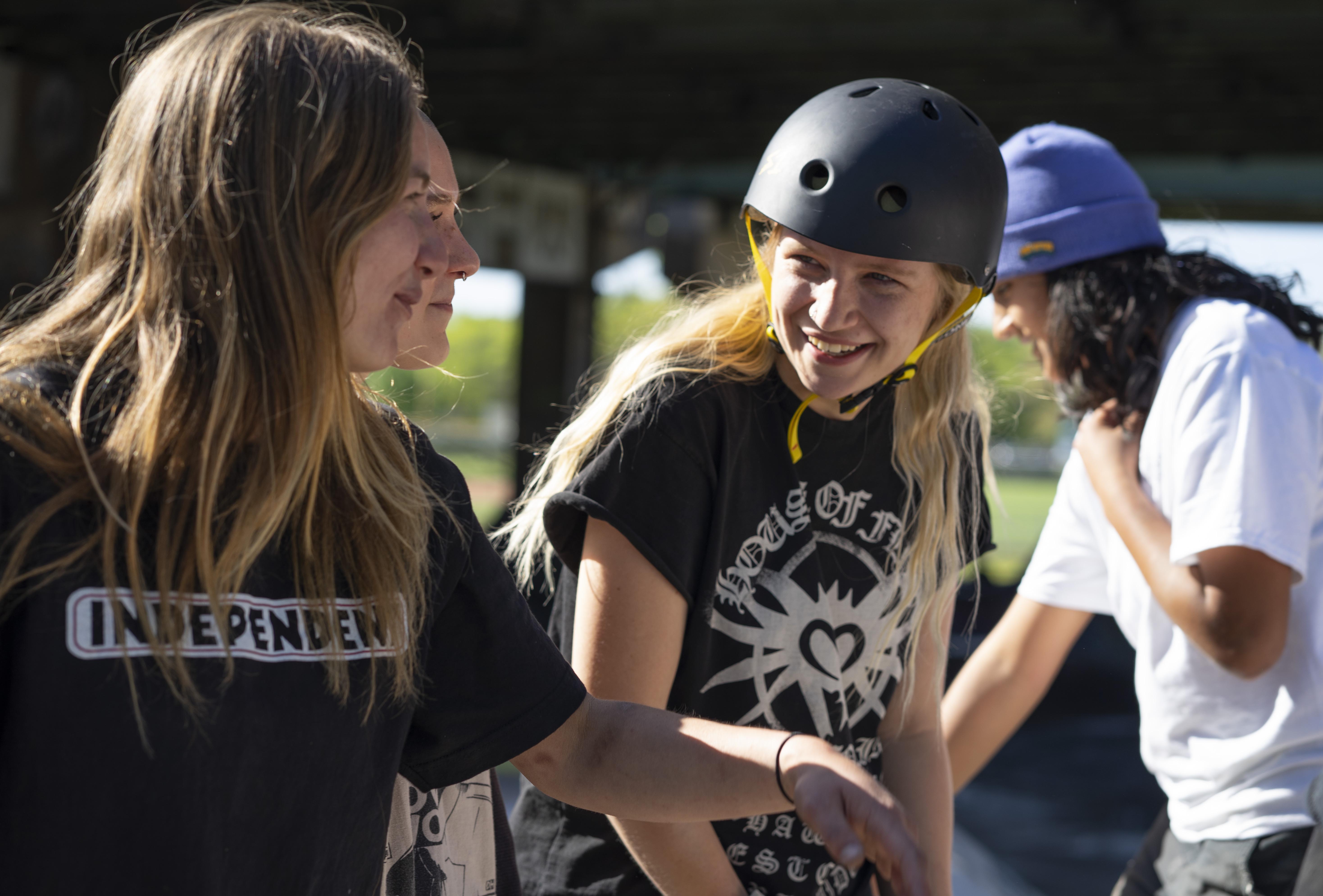 Sophie layin’ back into a proper frontside grinder.

How did you initially get into skating?

Two of my guy friends in high school skated, but it wasn’t until I moved out to Albuquerque that I really got into skateboarding. I used to skate at Los Altos skate park, the UNM campus, and the ditches. I met my best friend there at Los Altos skatepark. We were both from PA, and when I ended up back in Philly she was living here too. She had been skating at FDR and brought me down there around 2007. There was maybe a handful of girls who skated the park at that time. I just always watched the guys down there and would try to follow their lines. I just like to front slash, carve fast, and try to make it into as many different sections of the park in one line. 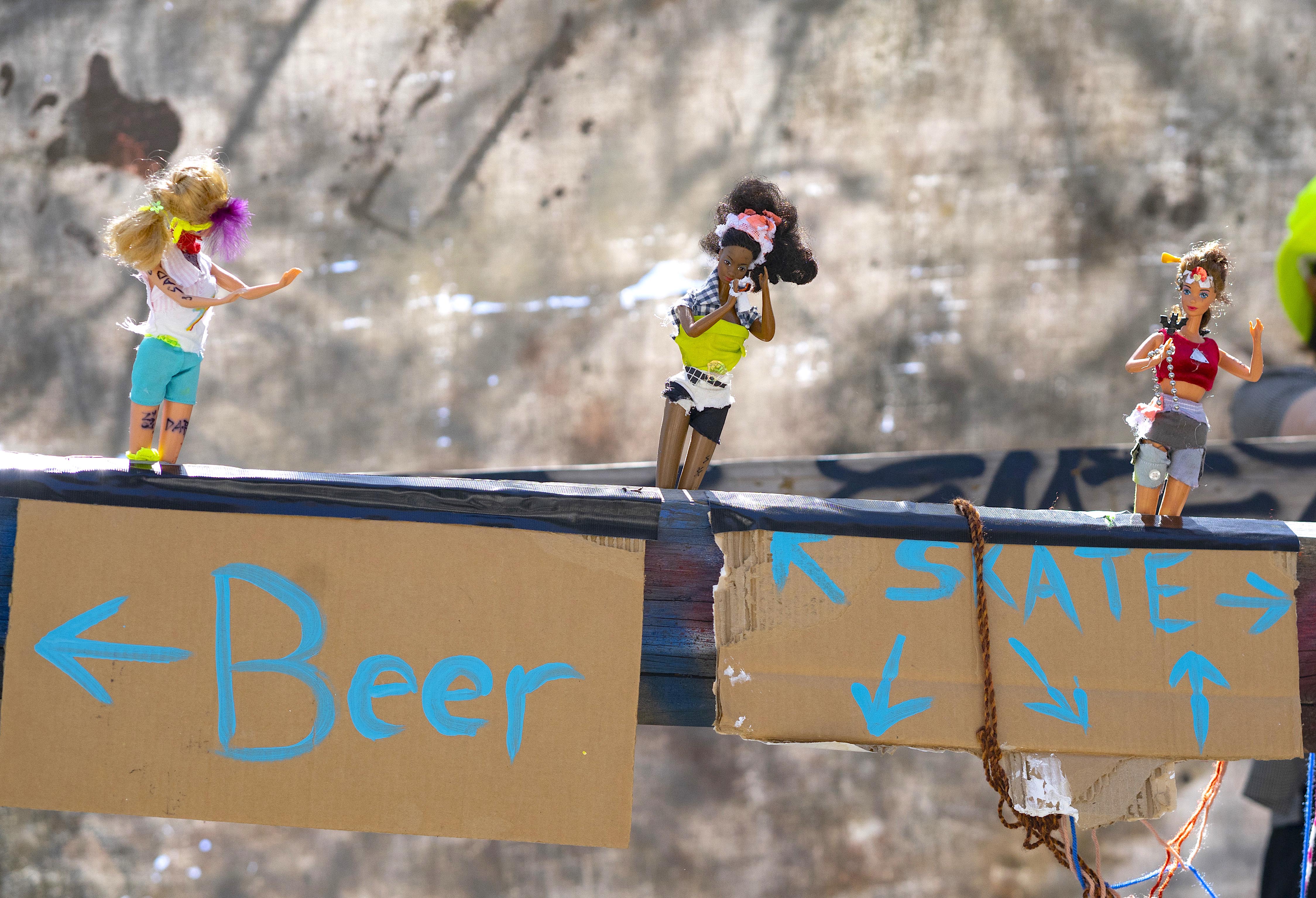 Looks like you can take a route that leads to both–The plastic Sirens of FDR lead the way. 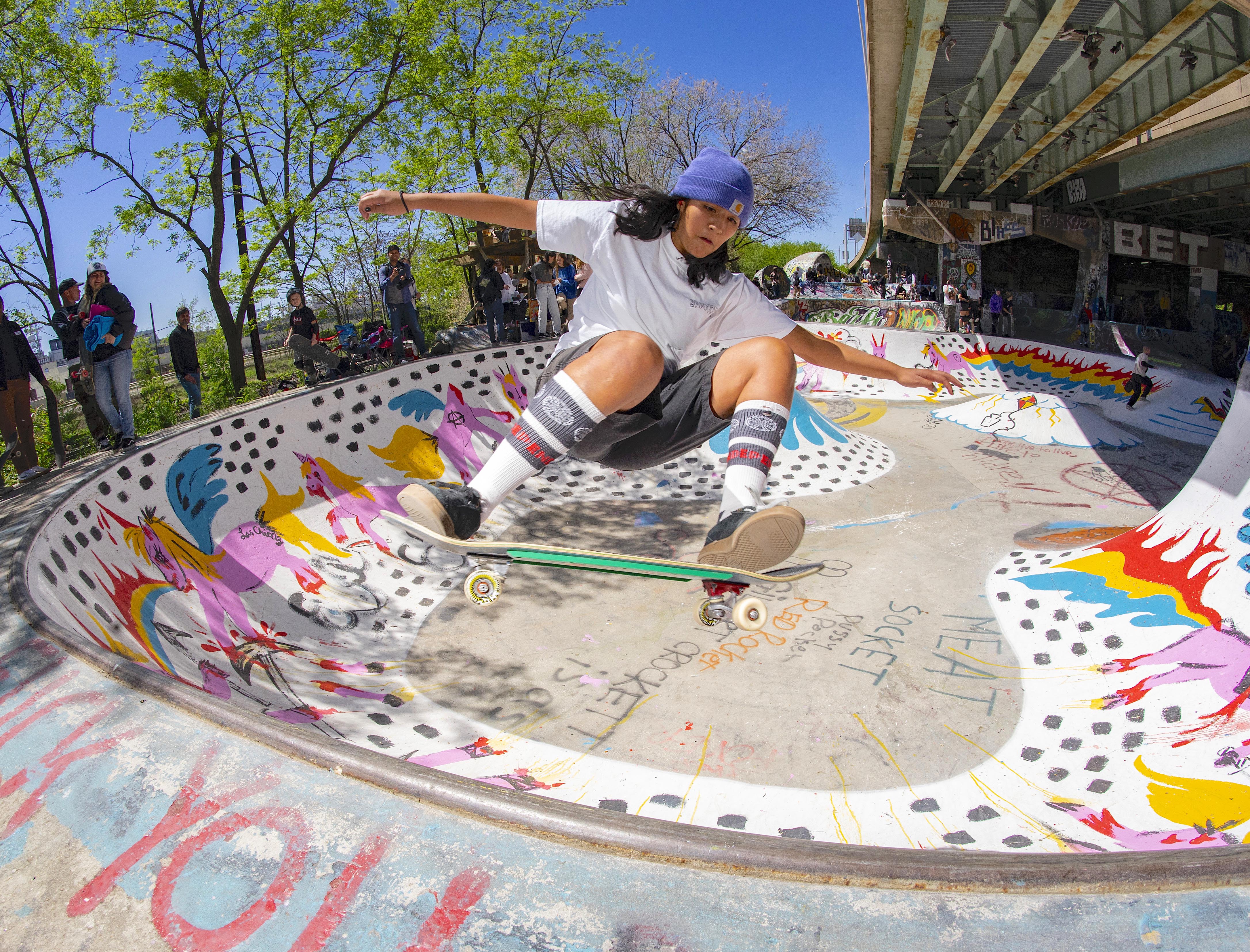 Here’s Nina frontside floating at one of the best parks in the world. What more can you ask for?

The skate scene in Philadelphia from an older women’s point of view has grown so much over the last ten years. Now there are so many groups of female skaters that meet up and skate at different parks. FDR is my favorite place to skate. I like the bigger transitions, flow, and crusty concrete. Plus there is always new stuff there that is being built so it never gets old. It’s fucking rad in that way, the community of skaters down there are always building.

Tell me about life at FDR, it seems like a pretty wild scene there. What were your first experiences there like?

What I love about FDR is you can go down there on any given day and see such a rich culture of Philadelphia’s art scene. There is paint everywhere and people doing music and fashion shoots all the time. Like the time a bunch of the boys got in the Jay-Z video. There’s just that wild spark down there that seems to connect people in a creative way. One memory that my friends often bring up is the time we had a fashion show when “Under the Bridge” premiered. The boys built a cat walk out of PBR cases and the girls were all stoked to model my crochet clothes. I was kinda bummed cause the clothes were all covered in beer and dirt by the end of the night, but it was fun. It’s always been really wild down there. 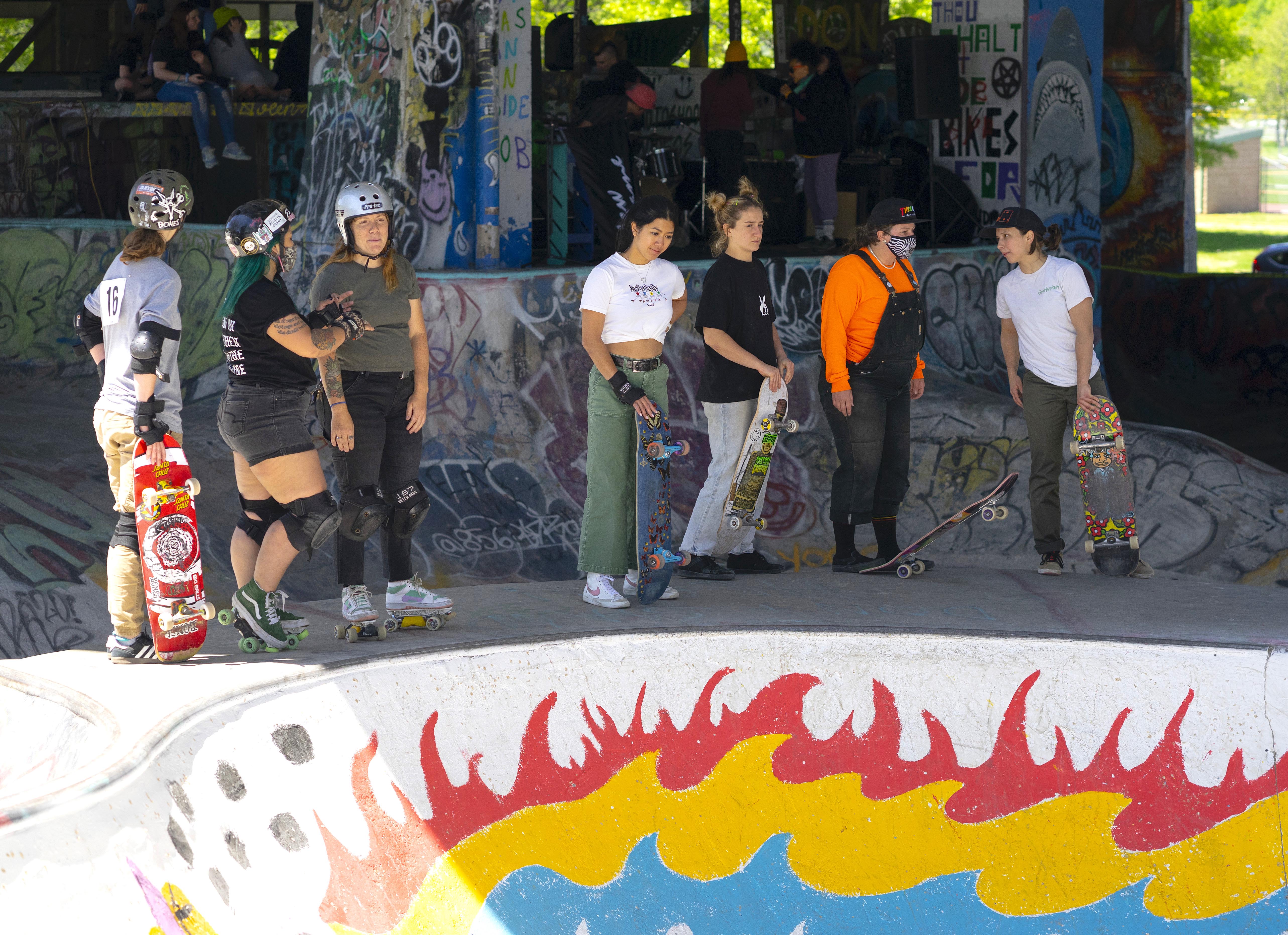 Deck was fully loaded with all kinds of wheels.

How’d the jam go? what were some of the highlights?

My favorite part was painting the back bowls the day before the event. Painter Bill who paints the flag every year came out and showed me how to prime the bowl with his spray gun. My cousin Danna, Alyssa, and Ryps helped paint too. Stephanie and Jean showed up later in the day and painted as well. Lauren was working on building the bar at the same time which was a smash.

The day of the event the bar was flowing with shots and margaritas. There was even a popcorn truck. All the vendors and the bands that played were amazing. This 13 year-old girl Hannah who skates came from Baltimore to play her cello at the beginning of the event. Then a really cool girl band from the Philly area named “Froggy” performed. There was a total of 37 girls that signed up to compete in the contest. I enjoyed giving the ladies all the goodies our sponsors sent and seeing Caroline get a wad of money for shredding so hard. It was awesome seeing everyone get their shine on in some way.

Who was the MVR (most valuable ripper) in the Ladies Jam?

That’s a really hard question. I loved seeing the younger girls that came out and skated in the event. There was a ten year old girl named Francesca that skated in the contest and you would have never known this one skater Nina was only 14. Nina was definitely my pick for MVR. She gave it her all, there was even blood dripping down her legs by the end of the contest.

Leah, Hope and Sophie holding it down & keeping community tight! 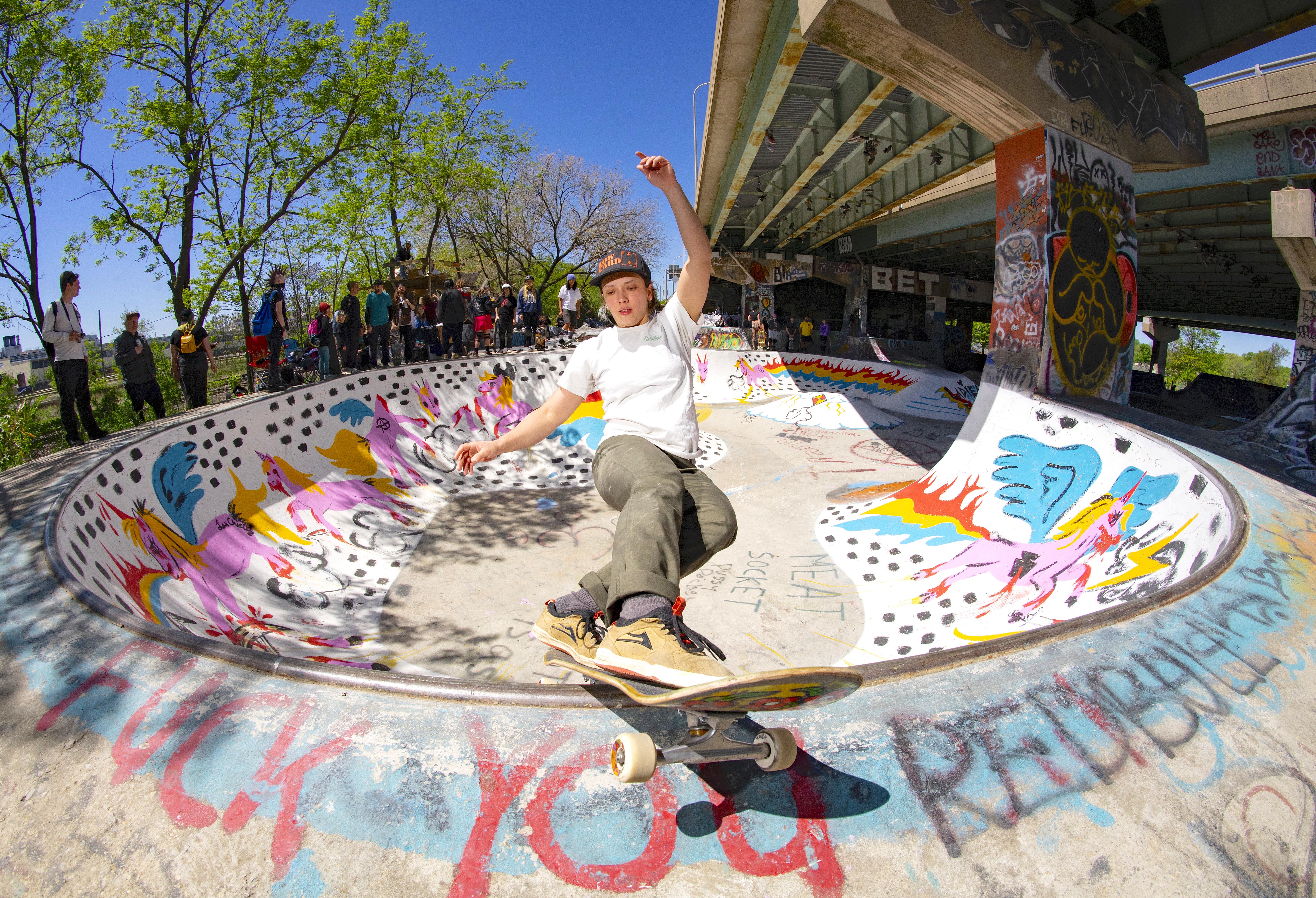 Aforementioned Leah catching a front rock that @not_decked might have an issue with–I think the form is on point.

What trick at the event absolutely blew you away?

I loved seeing Caroline front layback rock the bunker wall and Sarah Thompson front slash over the peninsula on the bunker wall. Leon and Leah at one point both transferred the spine almost at the same time. 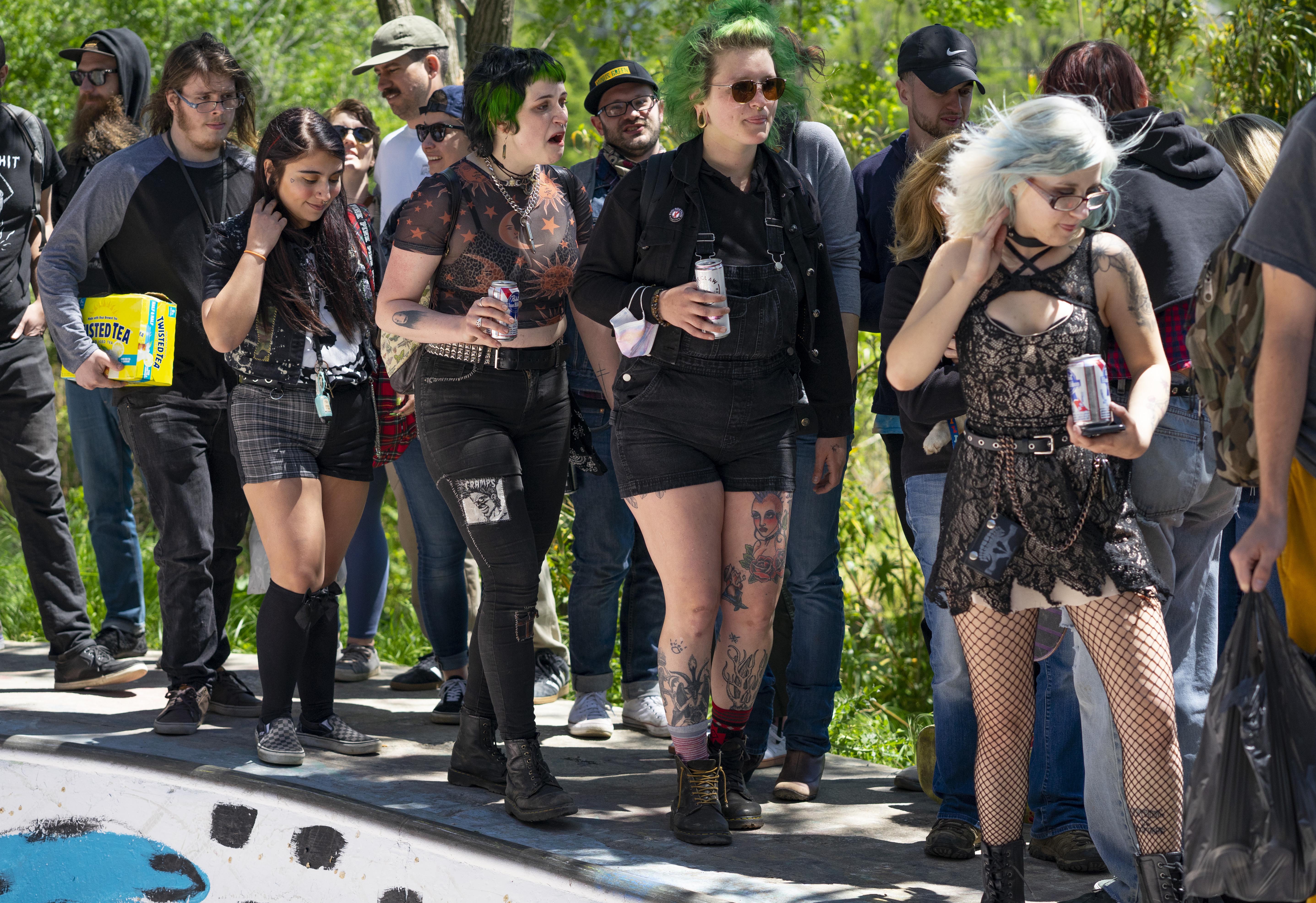 The claws had to make an appearance, with the teas coming in hot right behind. 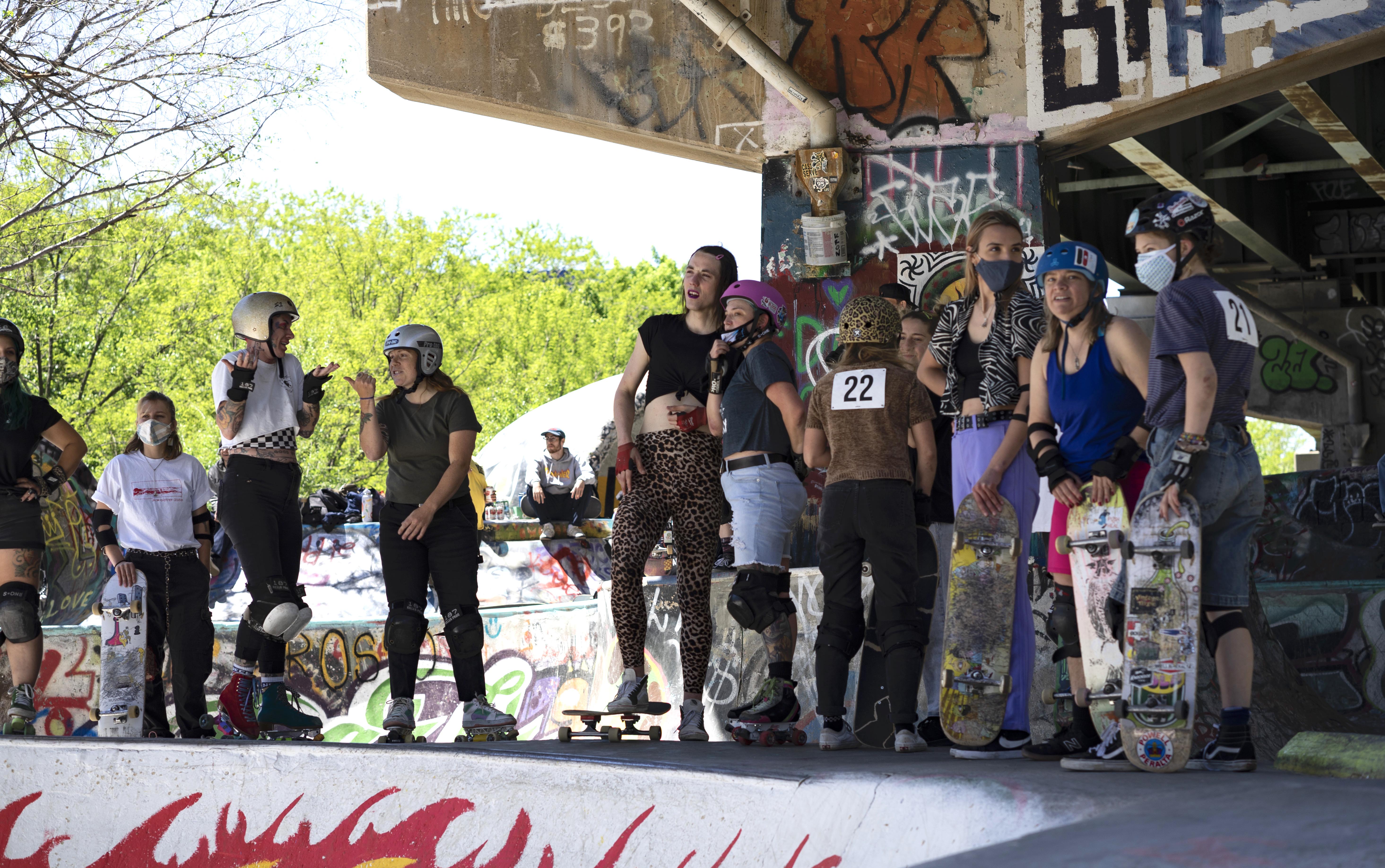 Homies plotting on the destruction to come.

Do you plan on doing this again? How can folks get involved?

I’m not sure what the future entails, but if we do it again it would be rad to see more ladies from other states come out and skate, vend art and play music. There was a big fire at the park that burnt down the vert ramp recently, so if you would like to get involved you could donate to the FDR’s GoFundMe page. https://gofund.me/9869172e 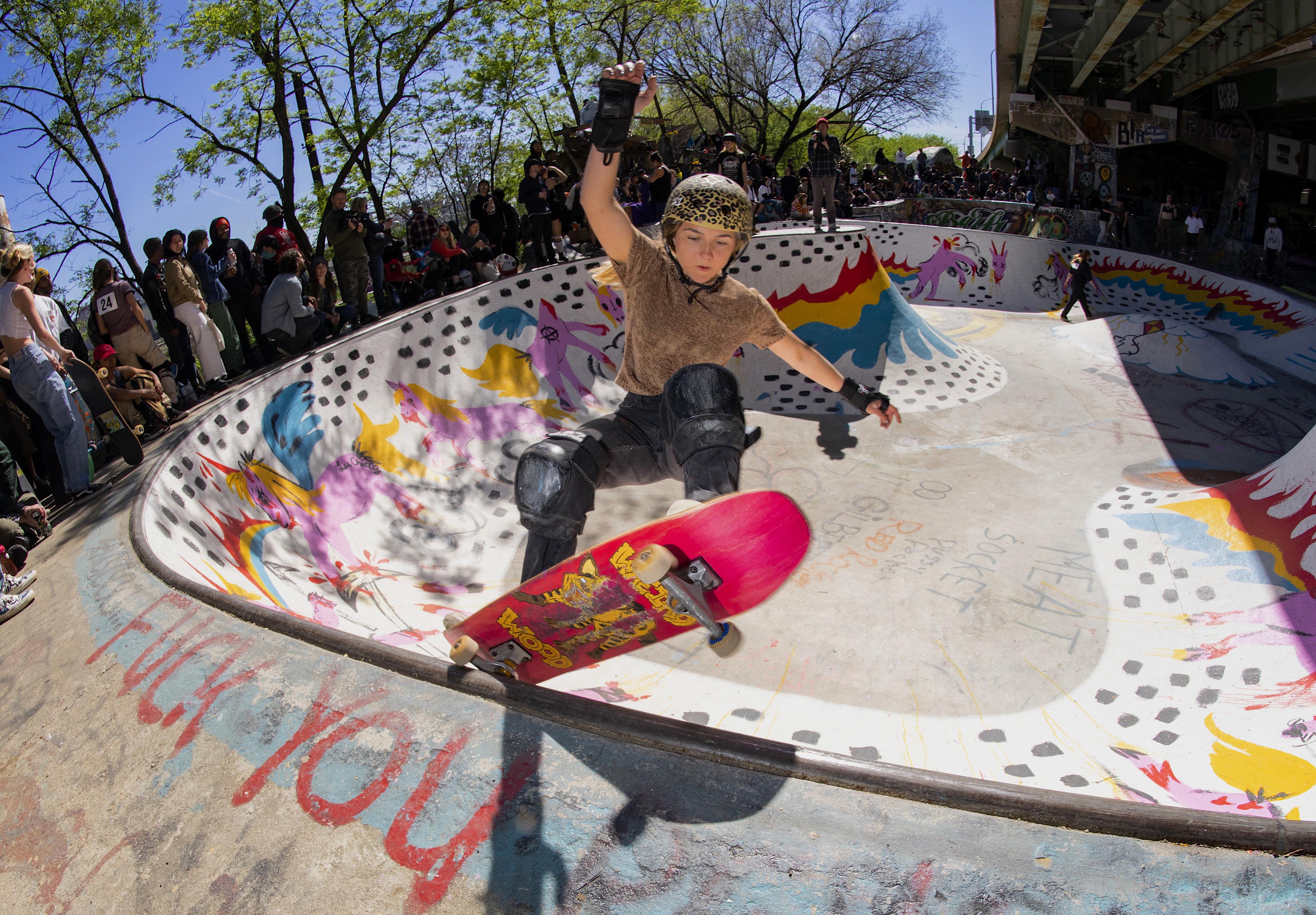 What wisdom do you have to pass on to other folks throwing events like this in their scene?

Think BIG…Grind Thru It! Thank you! 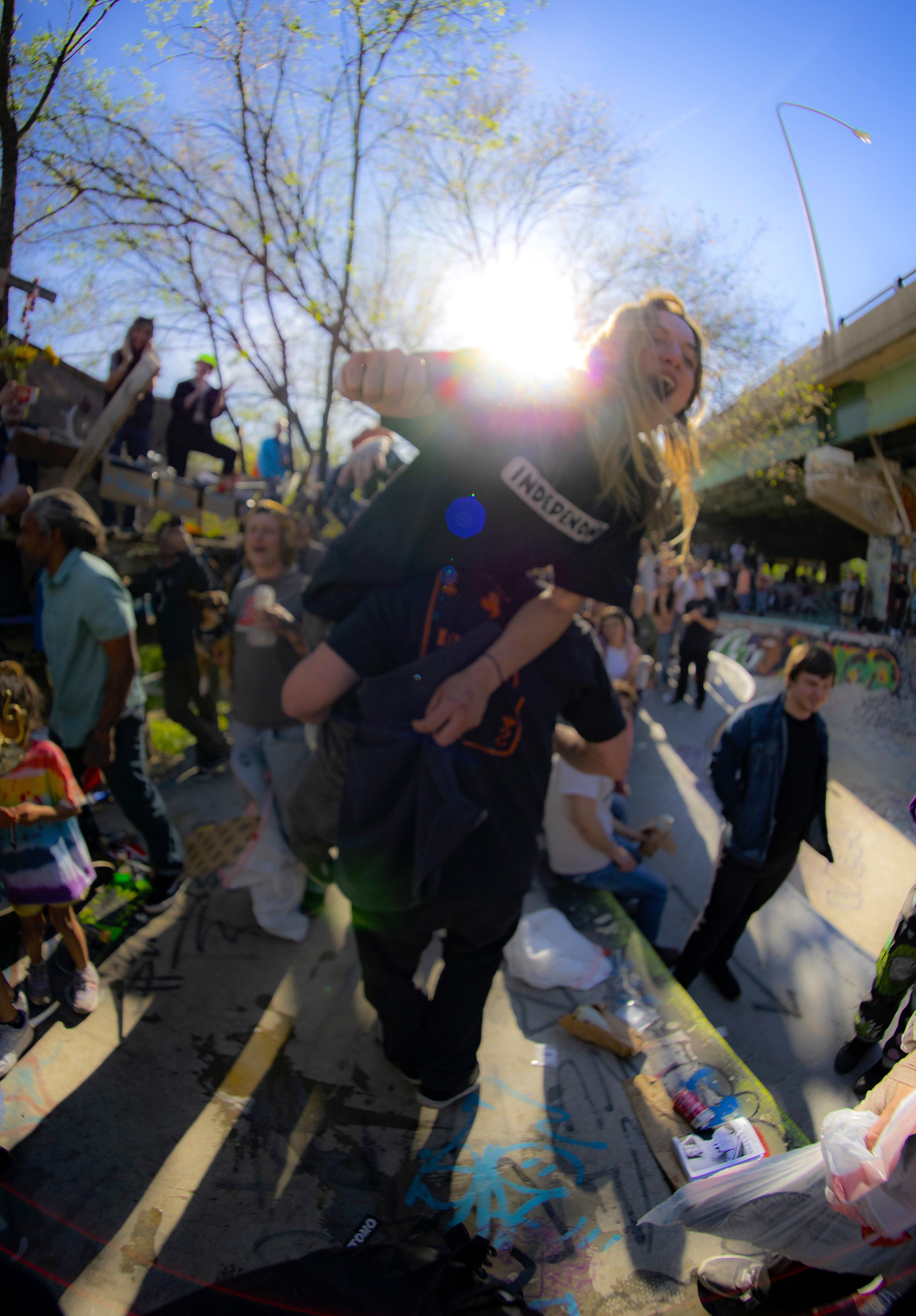 This is what first place looks like. Caroline done did it! @cduerr__ 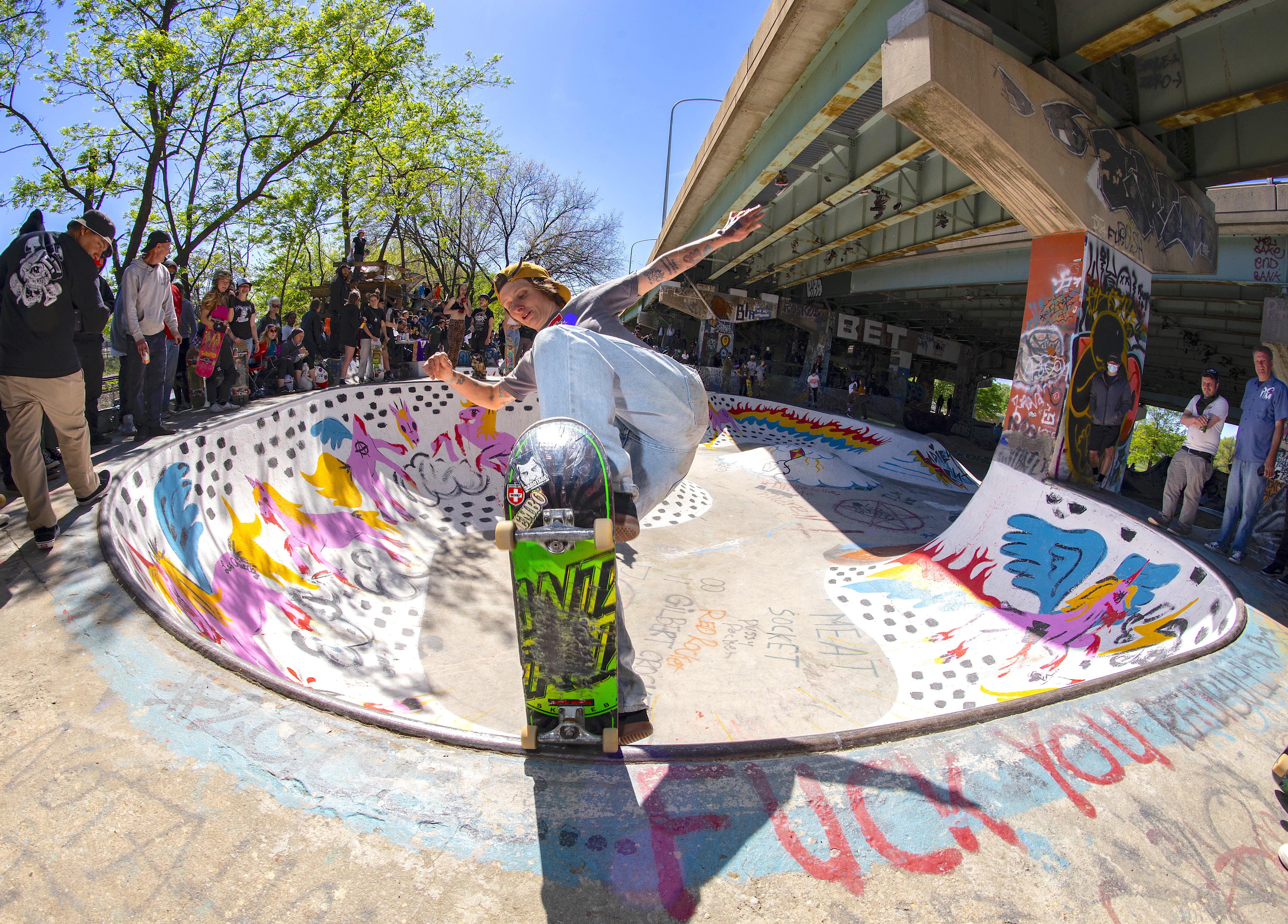 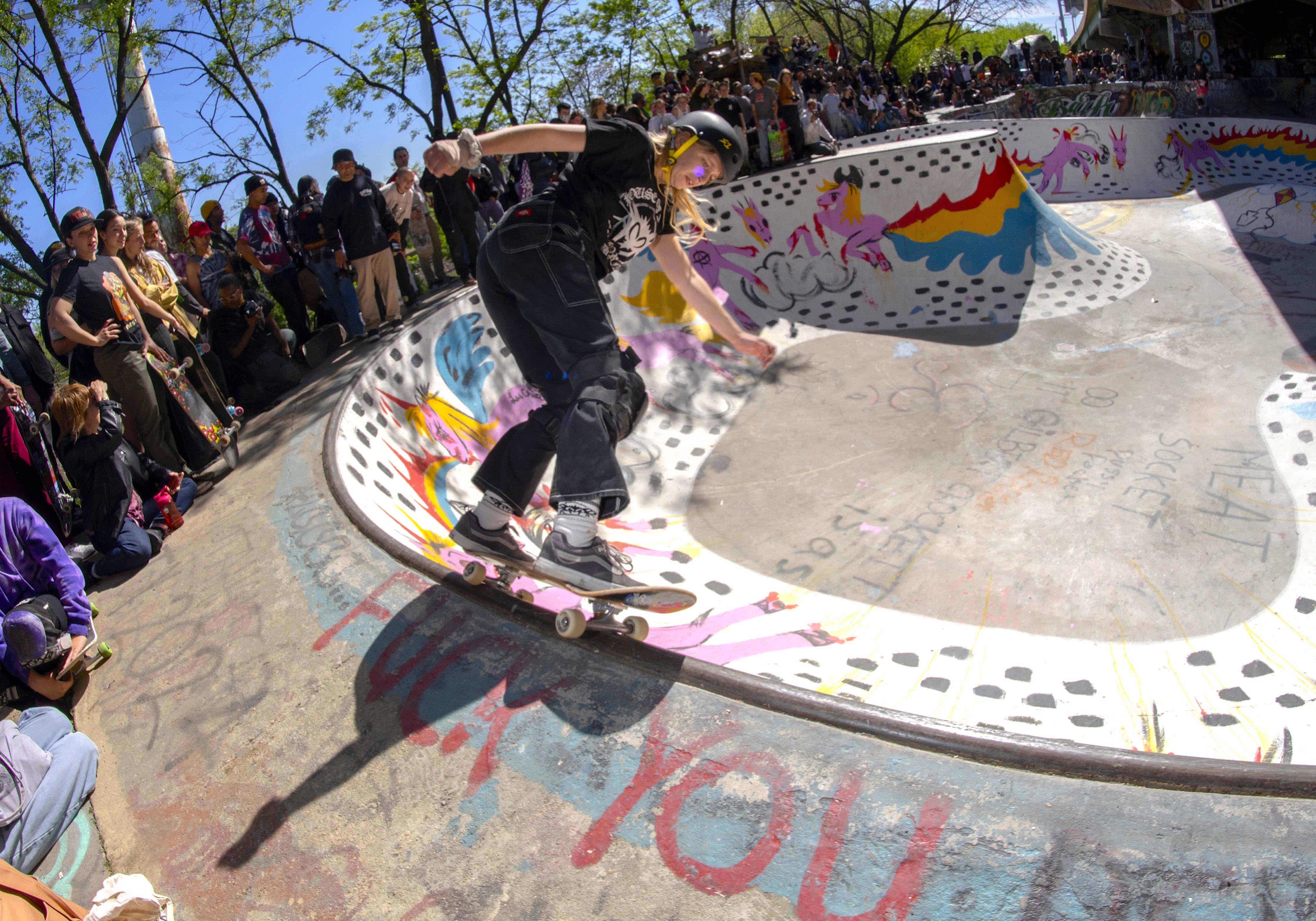 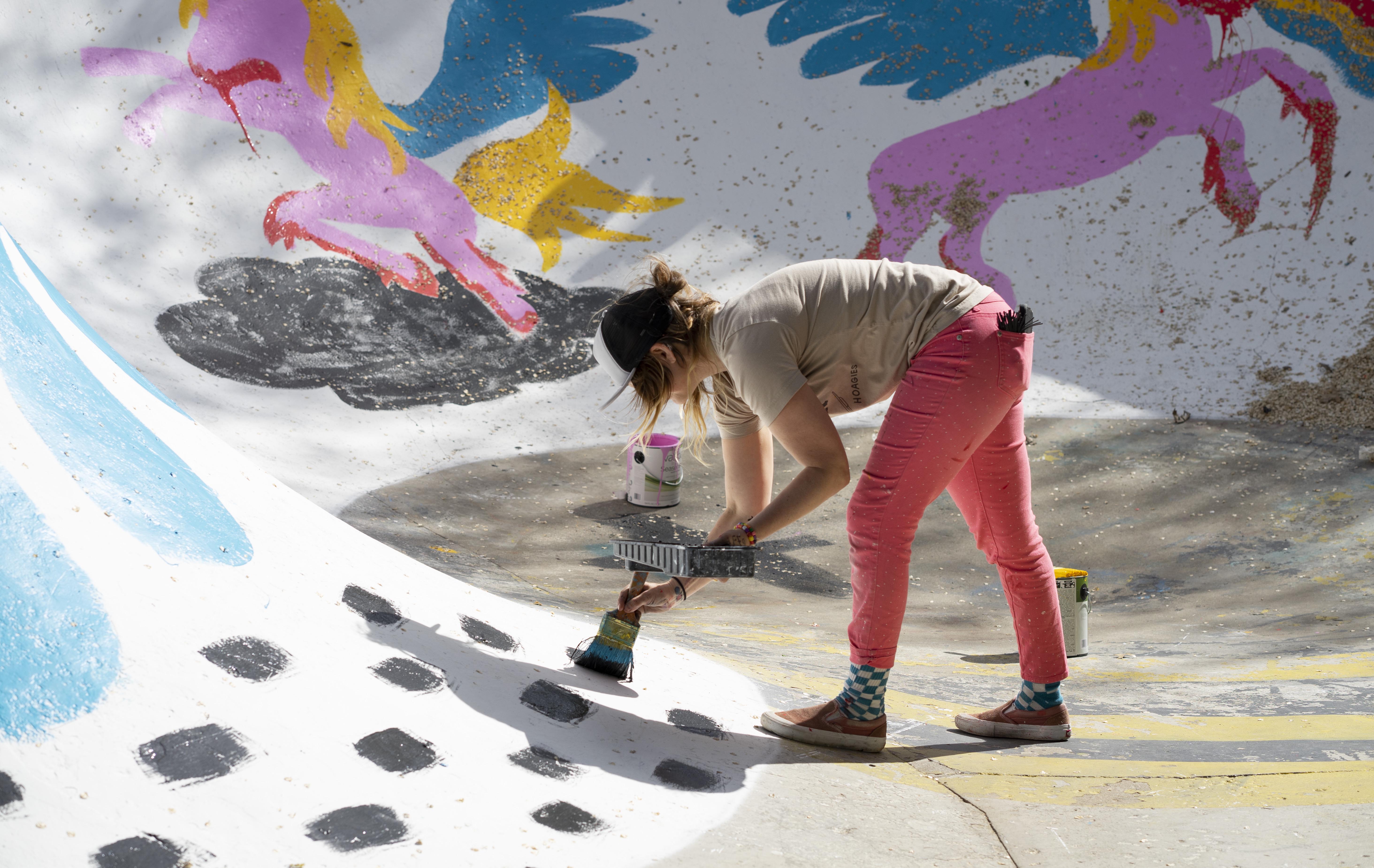 Legend has it that 0 flaming rainbows or headless ponies would be on the back bowl if Gloria hadn’t shown up. Thanks for handling business, yo!

Keep your finger on the pulse n follow the folks who made this happen @shredher.llc & @olga_aguilar___