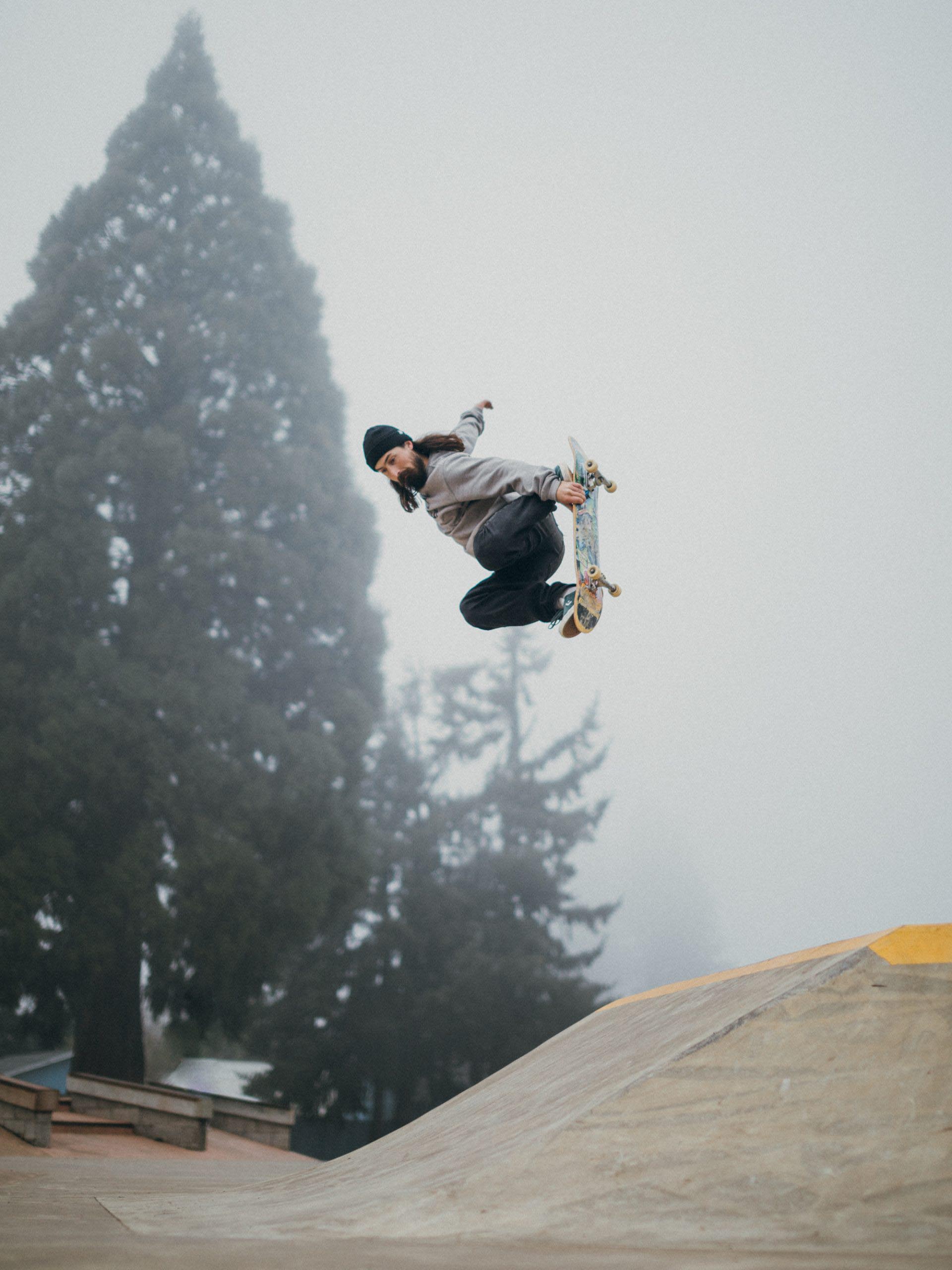 Oregon – it’s damp, it’s spooky, and it’s beautiful. One’s mind conjures up images of logging towns, or Modest Mouse, or rain, or Portlandia, or Drugstore Cowboy, but Oregon represents something else in the world of skateboarding. It represents some of the best sculpted terrain for what we love in life. With a fair share of notorious and crusty street spots, and the state’s impeccable selection of parks in some of the most rural areas, as well as the city, Oregon has cemented (pun intended) its place in skate culture. One of the people at the heart of creating some of the best images up there is Steven “Squid” Levas. He shoots with some of the gnarliest ramp rippers up there, but is also no stranger to the cold, hard streets and getting people in a multitude of settings. And he even puts out his own zine, Street Files, every so often, and regularly updates his photo blog. You can check all that out here. It is a great honor to give him this month’s Low-Res spotlight.

Here, we have a guy who is no stranger to us over at Lowcard, doing what he does best. Kevin Kowalski taking in the air up there with a monster Japan Air on a foggy day in Lebanon, OR. 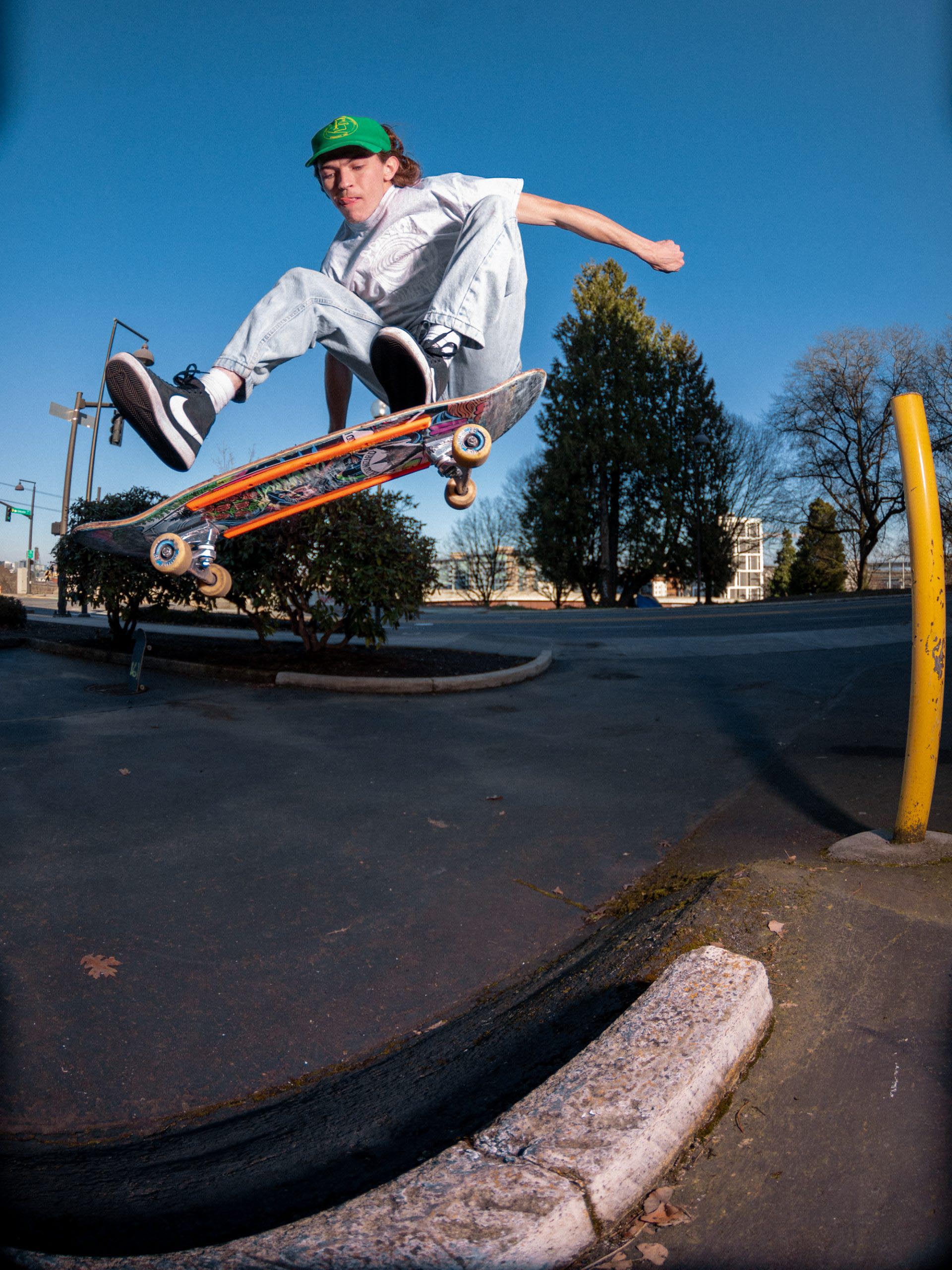 Initially, Steven Levas was put on our radar from shooting some wild photos of one of the Pacific Northwest’s best kept secrets, Riley “The Yote” Willey. His top notch kickflips can be seen here by attacking a cutty hip somewhere deep in Portland. 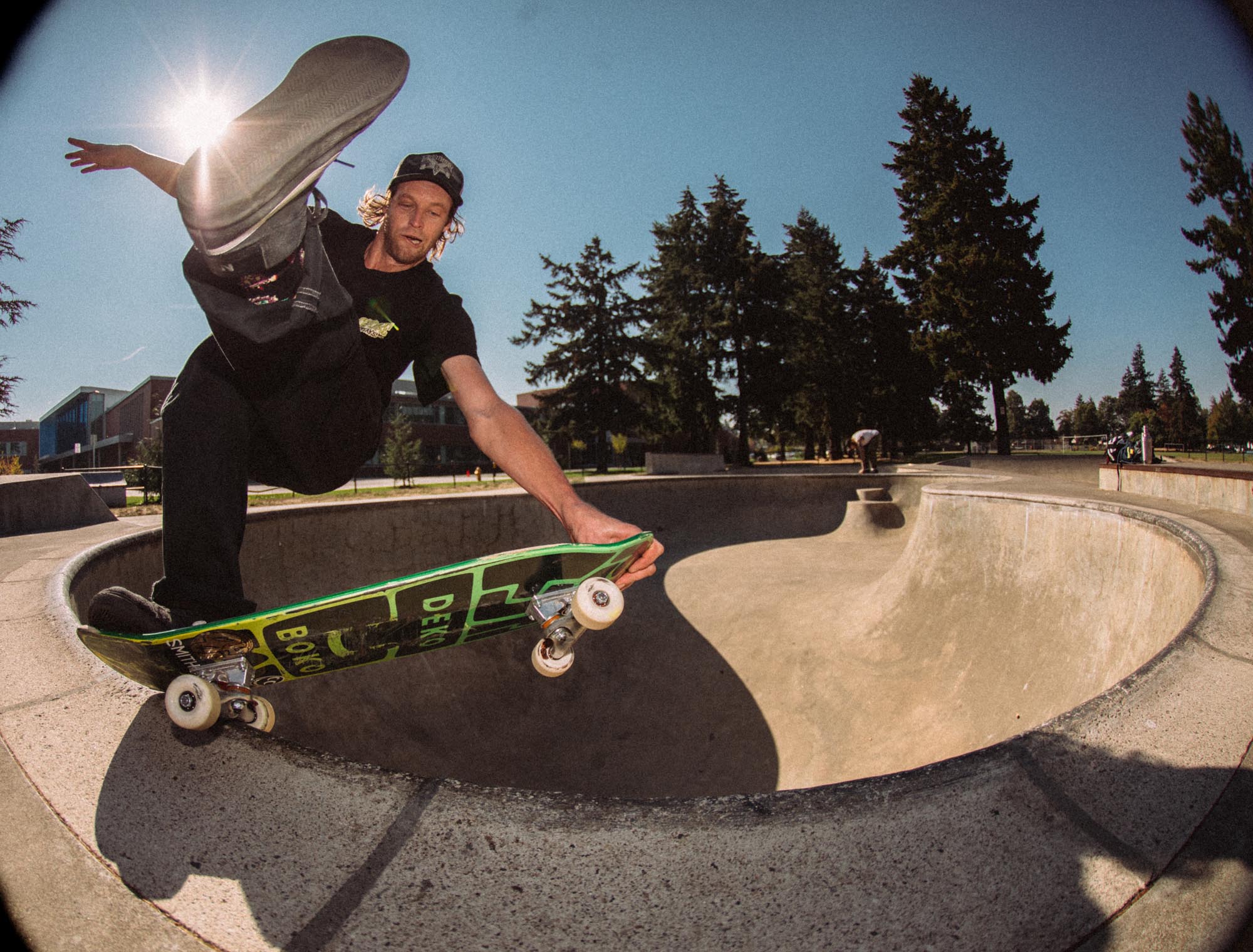 Any photo where the bottom of somebody’s shoe is totally visible always stokes the flames of skateboarding. Not to mention, the sunlight poking out behind the heel. Killer composition of Willis Kimbel doing a Judo Grind at the Glenhaven park. 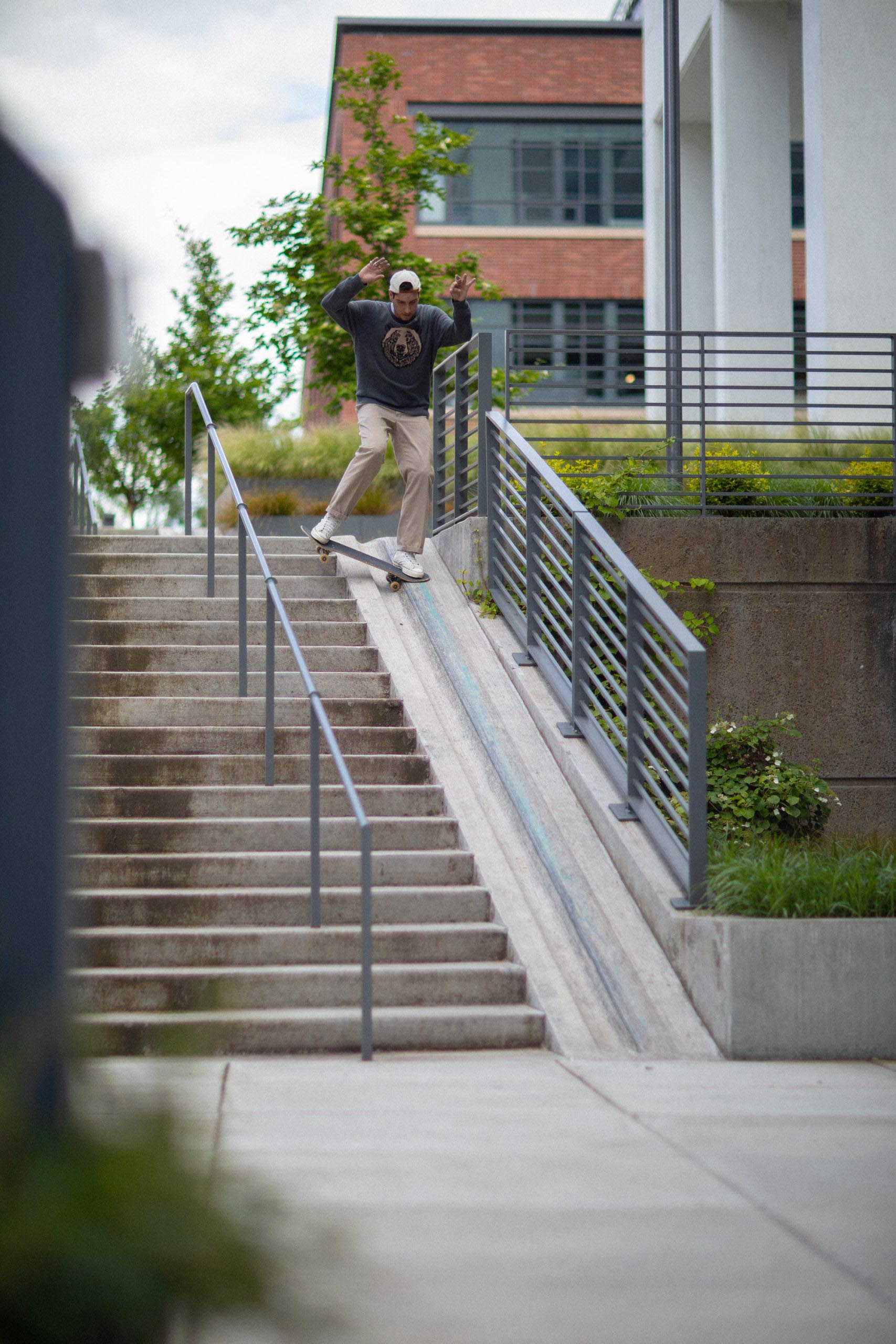 According to social media, this is your mama’s favorite skater. The elusively nicknamed TK pulls off a very lengthy ride-on noseslide at what looks like to be a pretty quality set of stairs. 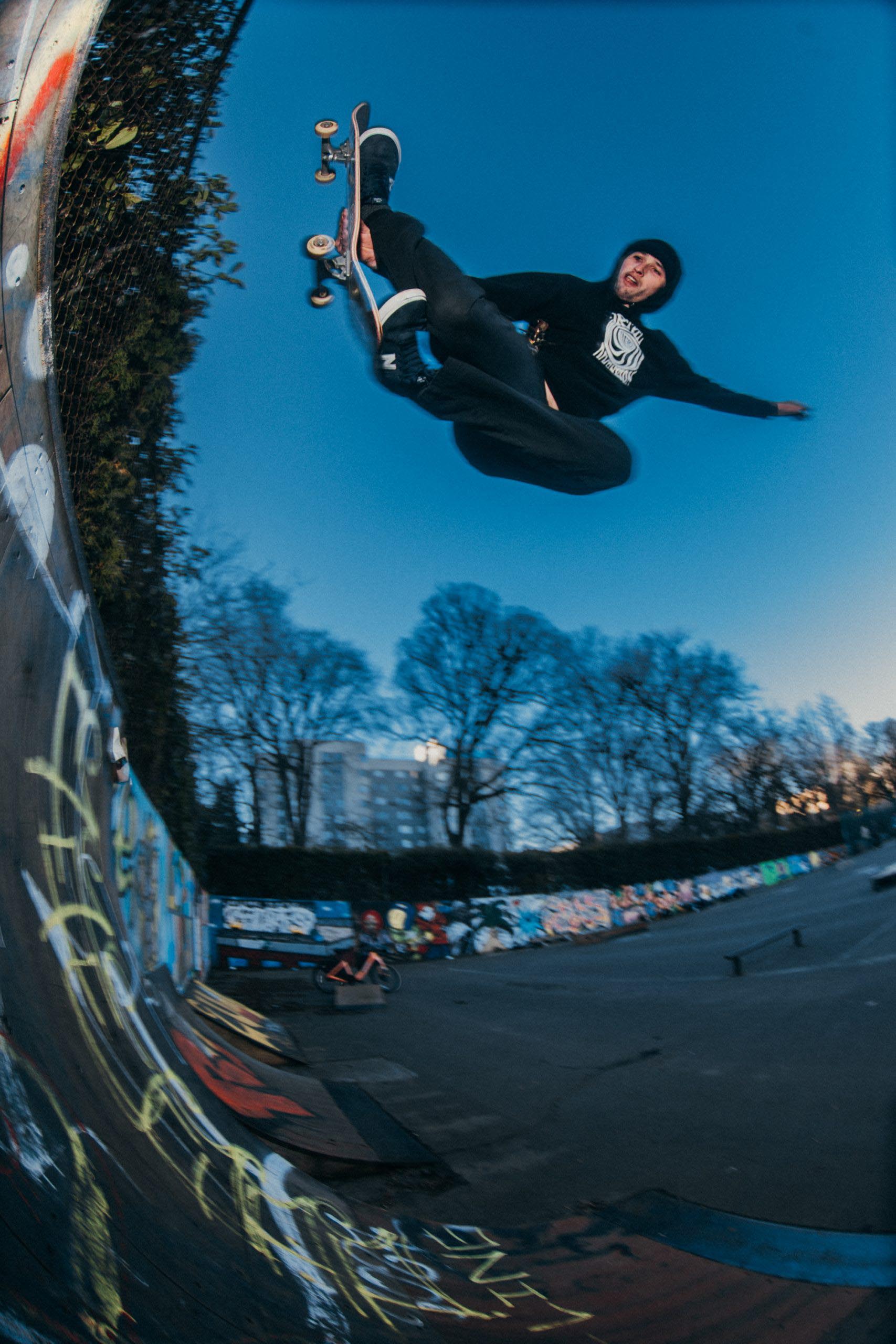 In the catacombs of my mind, Anakin Senn is still the little kid from the end credits to Jump Off a Building, but in reality, he is this stone cold ripper who has been crushing it on the board for almost two decades. Here he can be seen at the famous DIY known as “the Courts,” busting a steezed out fakie stalefish. 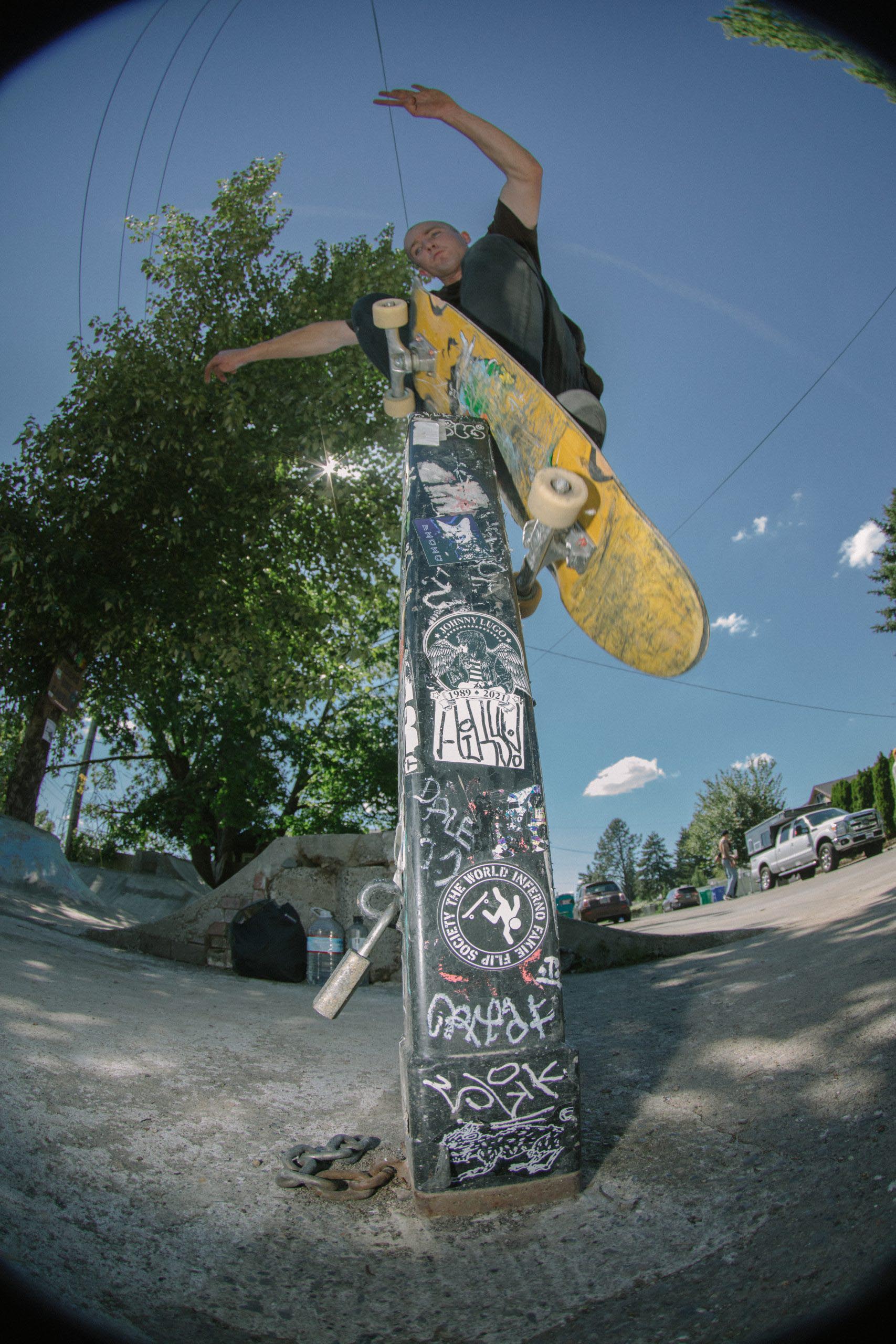 Deep in a quiet neighborhood far out in Portland lies the Ferral Cat Cove DIY. It boasts a number of quality obstacles in a neighborhood that ultimately had let the plot of land fall into disarray before some skaters came in and changed the narrative. This pole here that Theodore Hendrix is jamming isn’t necessarily at an angle to jam, so his maneuvering up and over is held in the highest regard. 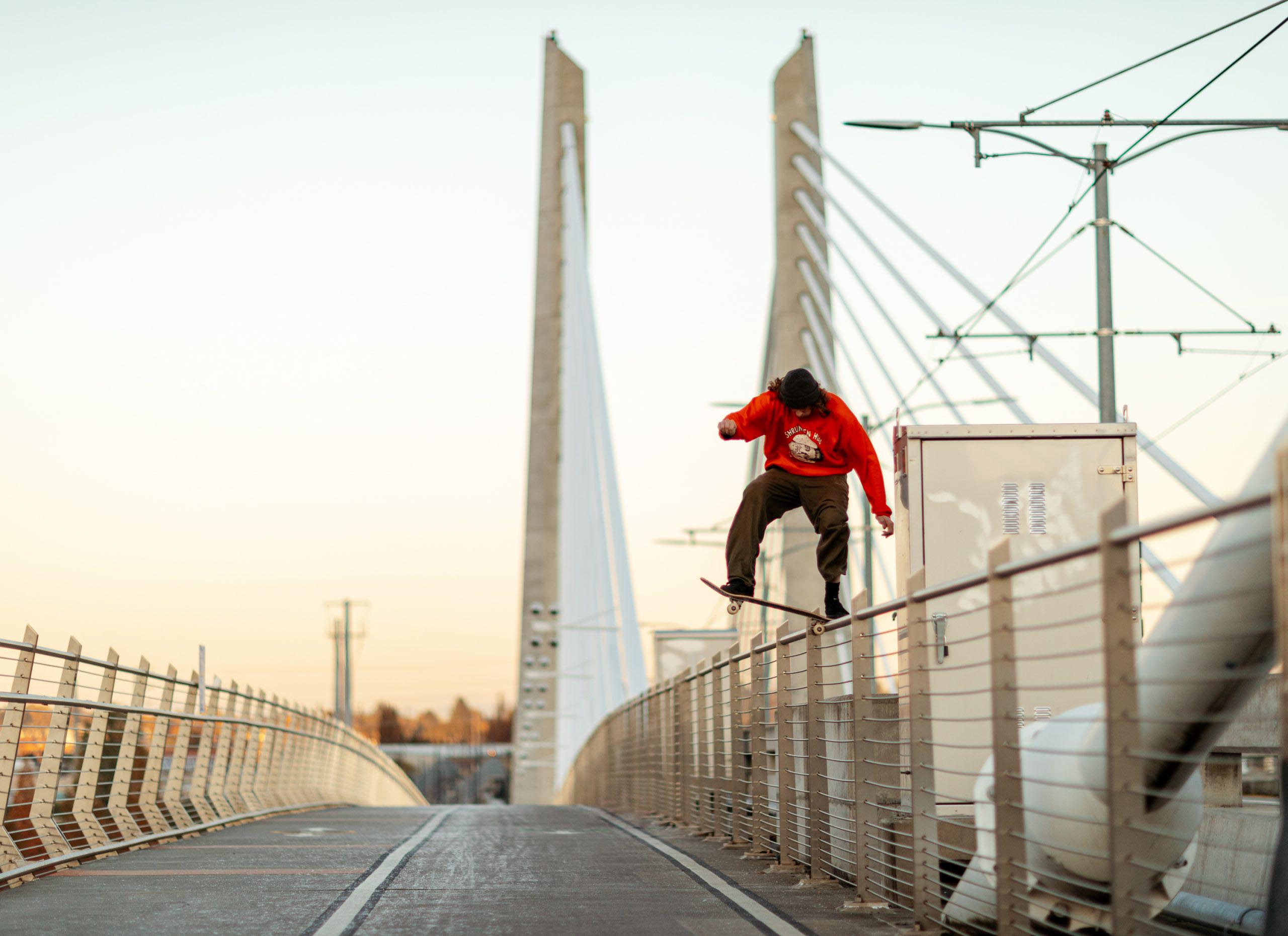 Sometimes I enjoy staring at a photo for a long time and trying to figure out exactly how the trick went down due to not fully grasping the spot. This bluntslide in Portland from Alex Patterson is a prime example of that, but solid composition and a nice red sweater level this photo up even more. 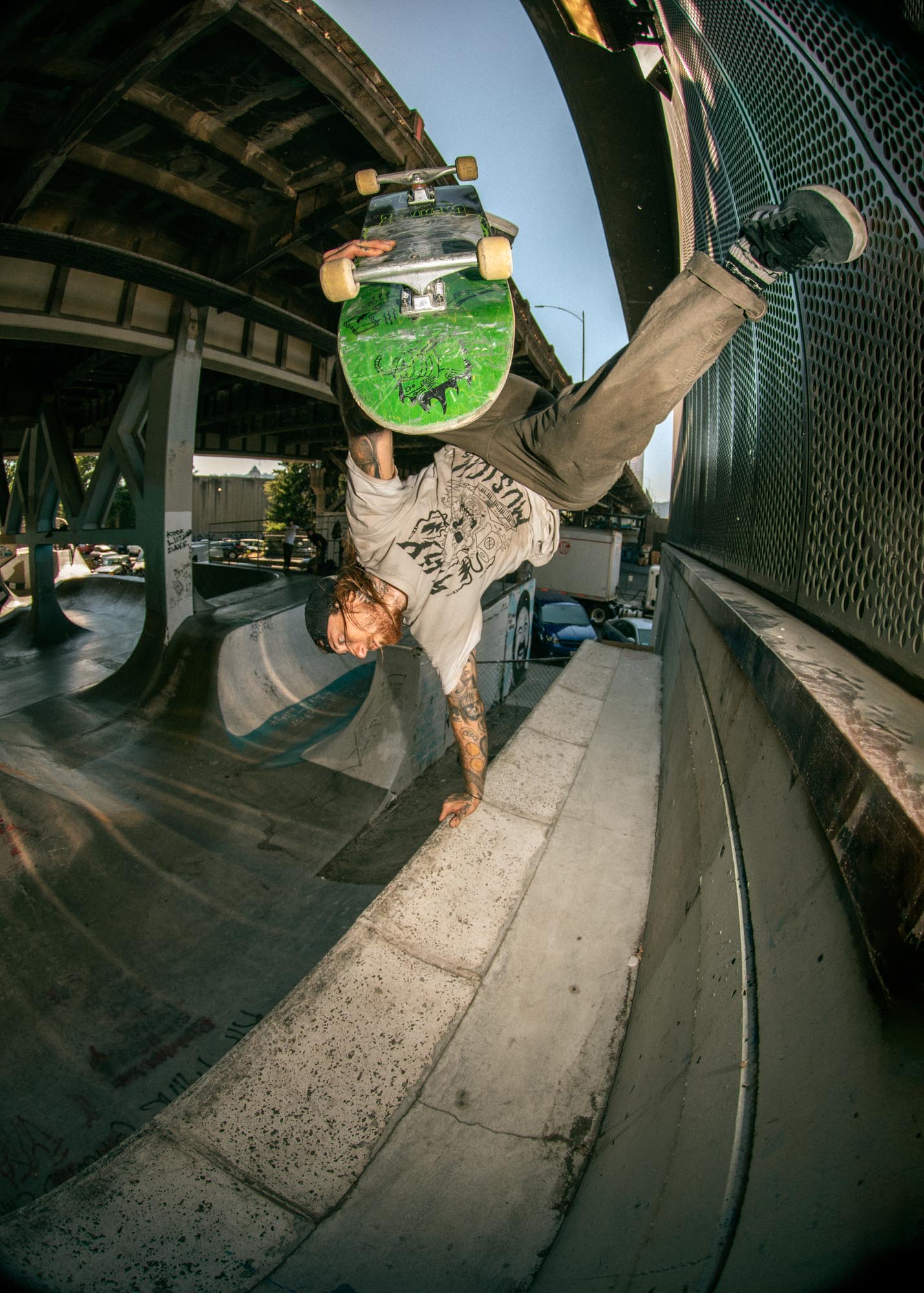 There’s a lot to love about this photo. Chris “The Muscle” Russell, at the most legendary park to ever exist, busting out a not very common footplant invert. 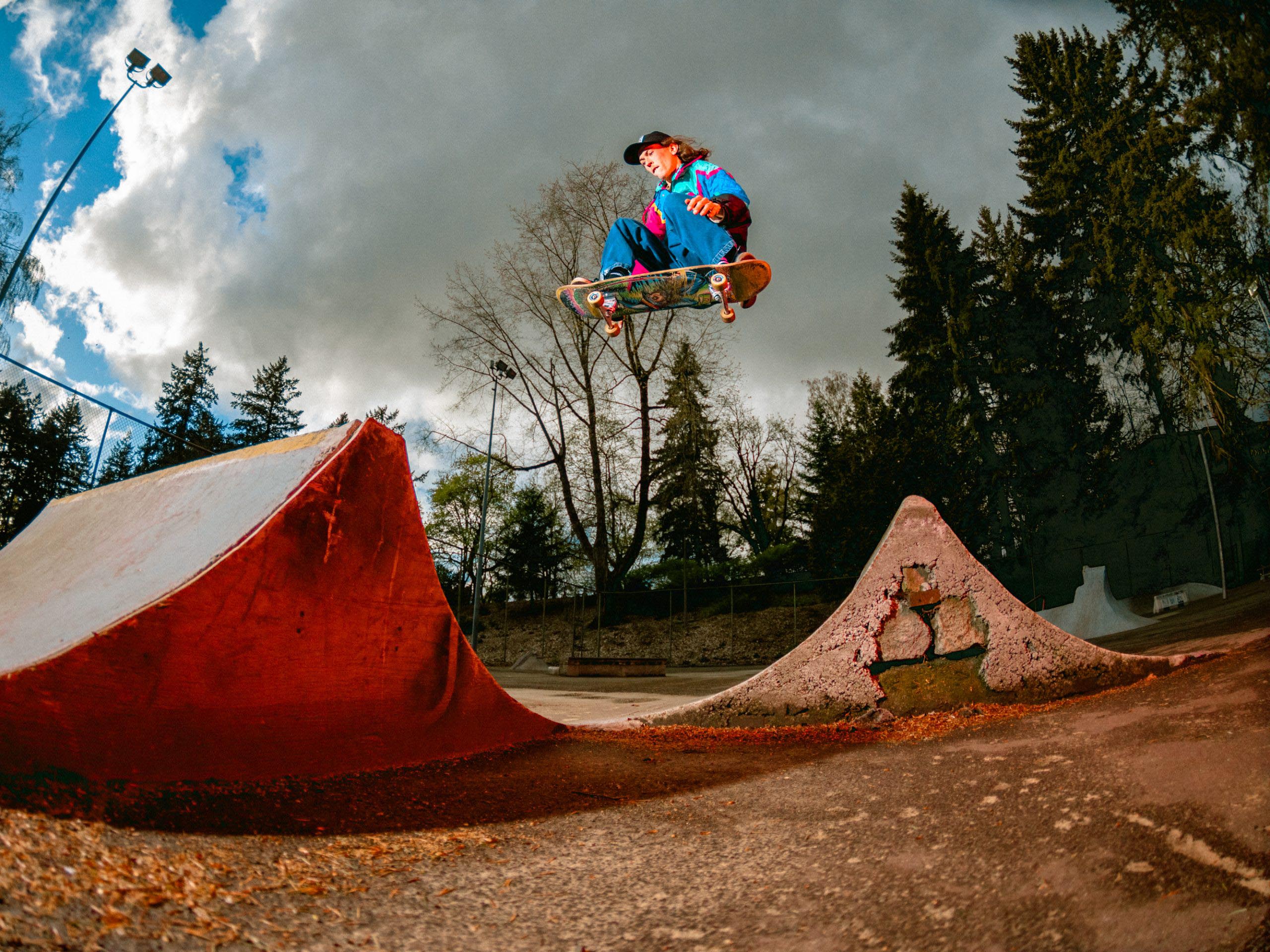 10/10 on this jacket choice by Riley Willey. A good fit will always pop on a day when the clouds loom overhead, much like the Yote is popping this big ollie at the Creston DIY. 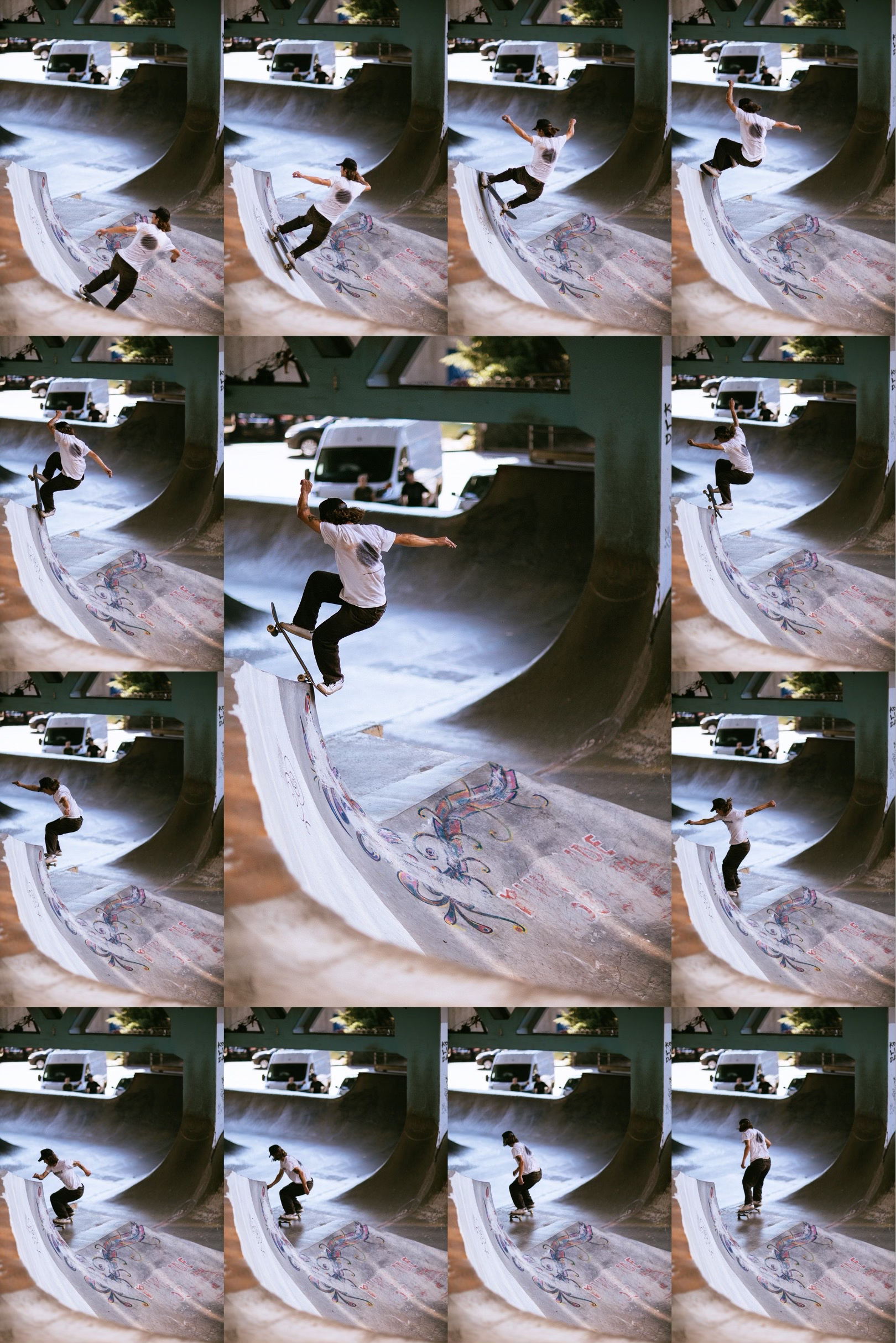 It’s not very often we get sequences for Low-Res, but we absolutely had to run this one. Originally sent as GIF (technology be damned), this sequence of Jake Selover doing a halfcab blunt on this little wedge at Burnside is just insane, and a fine group of images to conclude Squid’s fantastic Low-Res piece. Be sure to check out his blog, and buy his zines.