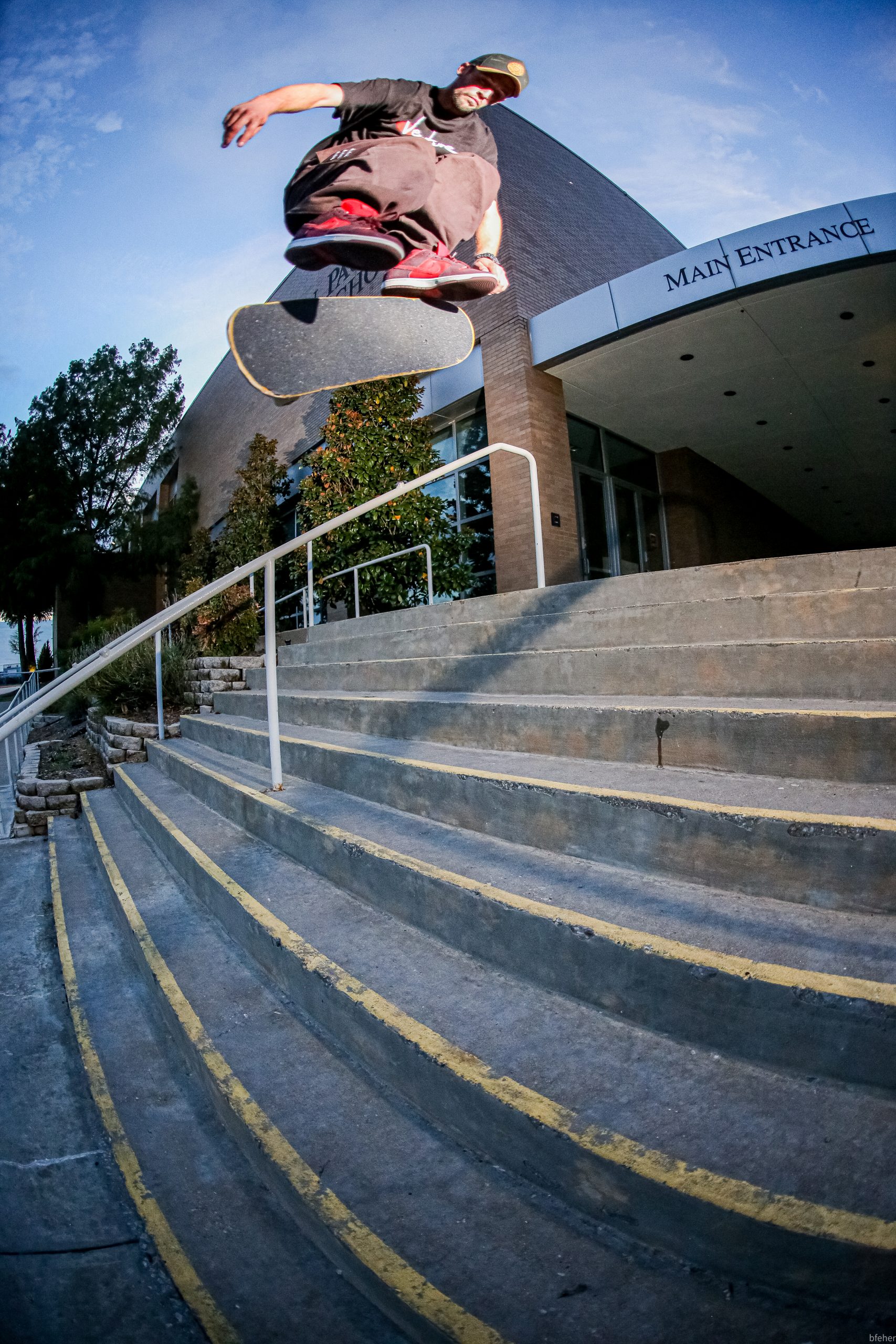 Texas is one of those mindblowing states that could potentially qualify as its’ own nation. Most Texans are REALLY stoked on Texas as a whole, but one of the most unique things about the Longhorn state that differs from most in America (other than maybe California, or Florida) is that it has four major cities that define it, and a handful of other notorious cities that also have their own sense of civic pride. Dallas is one of those major four, and it should come as no surprise that within the streets of a city where “big things happen,” there would also be a thriving skate scene. Known for the legacy of Mike Crum and the 4 Down project, Dallas has always held a special place in skate history over the years. And one of the people putting out some of the finest photos in Maverick territory is Bence Feher.

Naturally it makes sense to kick things off at the main entrance with this solid switch flip from Kyle Rhodes. He looks way too comfortable to be throwing such a maneuver down a 9-stair.

The gap out of this feeble looks pretty tasty for Dakota Camp, but I can’t help but wonder how tasty Shawarma World is. After sticking this grind, I hope the boys treated themselves to a wrap that received 4.5 stars on Google.

Unsure if this color scheme was planned by Zack Pinkerton, but it’s really accenting this switch hardflip as the cityscape swallows him whole. Fit has gotta be on point when the buildings cast those long shadows in the later afternoon. 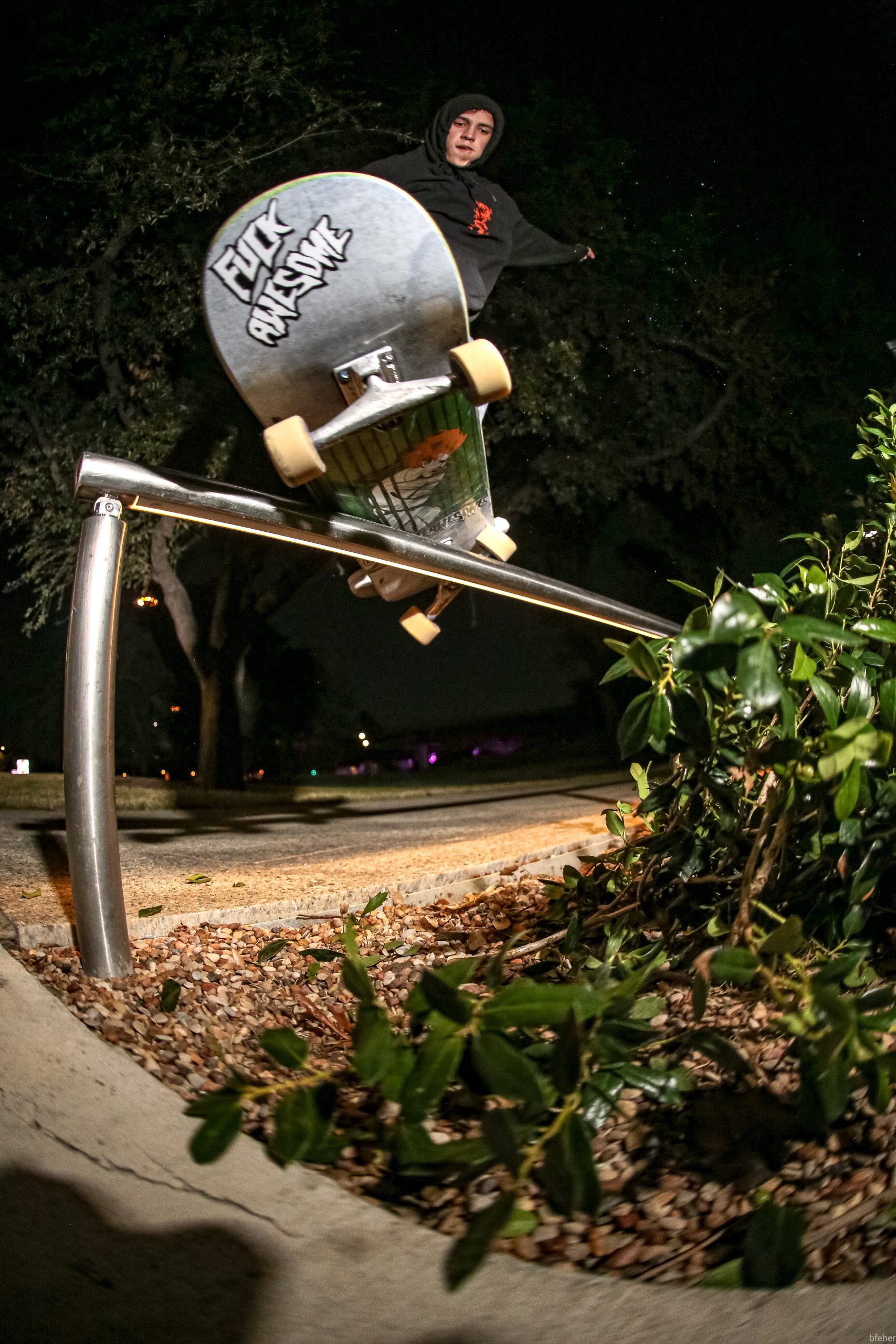 Fuck Awesome. Orlando Cruz burns the midnight oil to feeble across the dirt while using some laser focus.

Continuing the theme of the night moves with Gauge Doisher hardflipping these buttery blocks. This spot looks like a dream with some smooth tiles, a sizeable gap and a buttery red curve.

This night move in the collection features a very nicely lit backside flip from Zack Pinkerton. With the combined street lights, and the nearby flash, it really illustrates his ninja style. 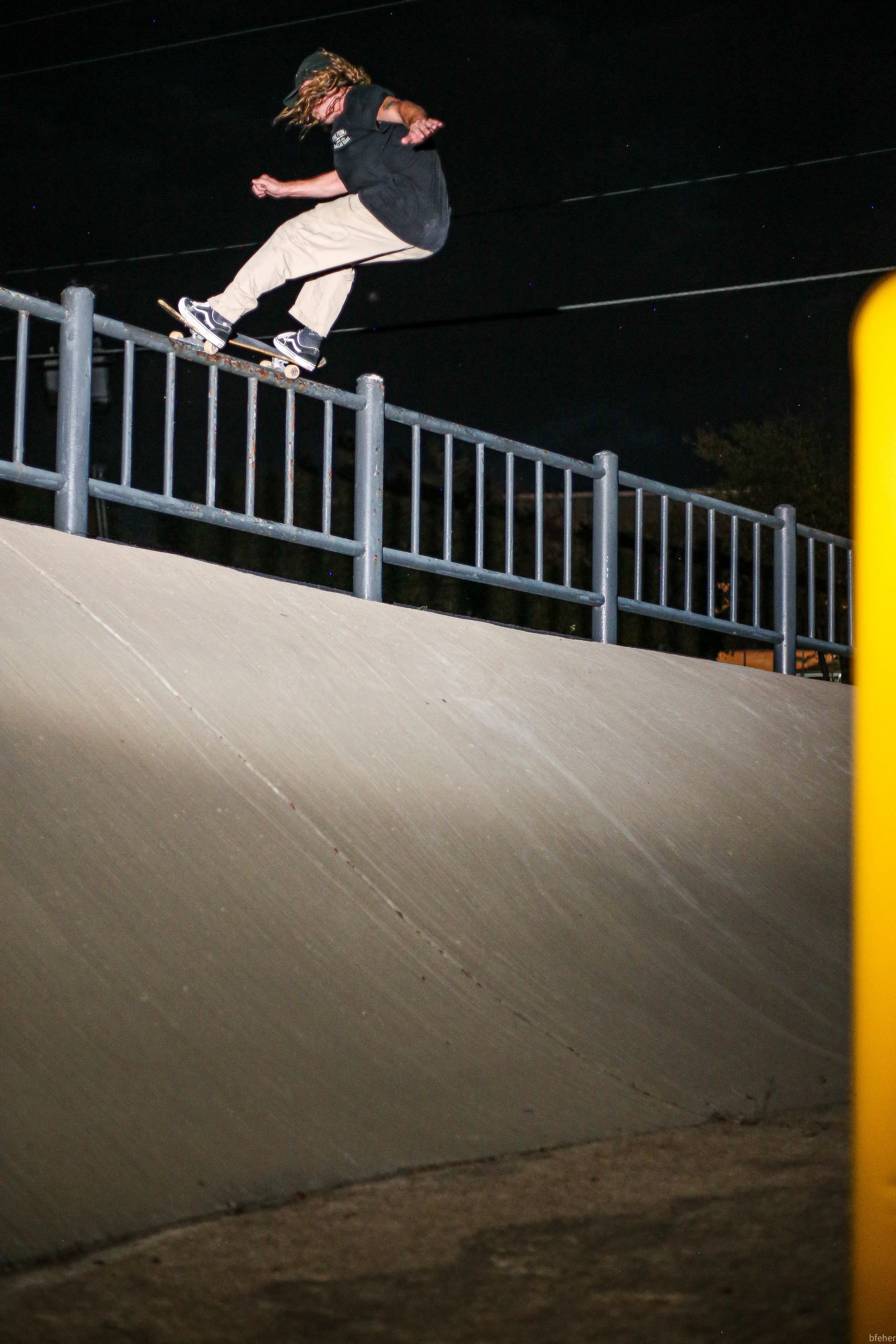 The final night move in this gallery features Neil Morales getting on top of a real tall 5050. I wonder how fast he had to push through that crust at the bottom to get the speed to get on top of that rail, or if his pop is just naturally insane. 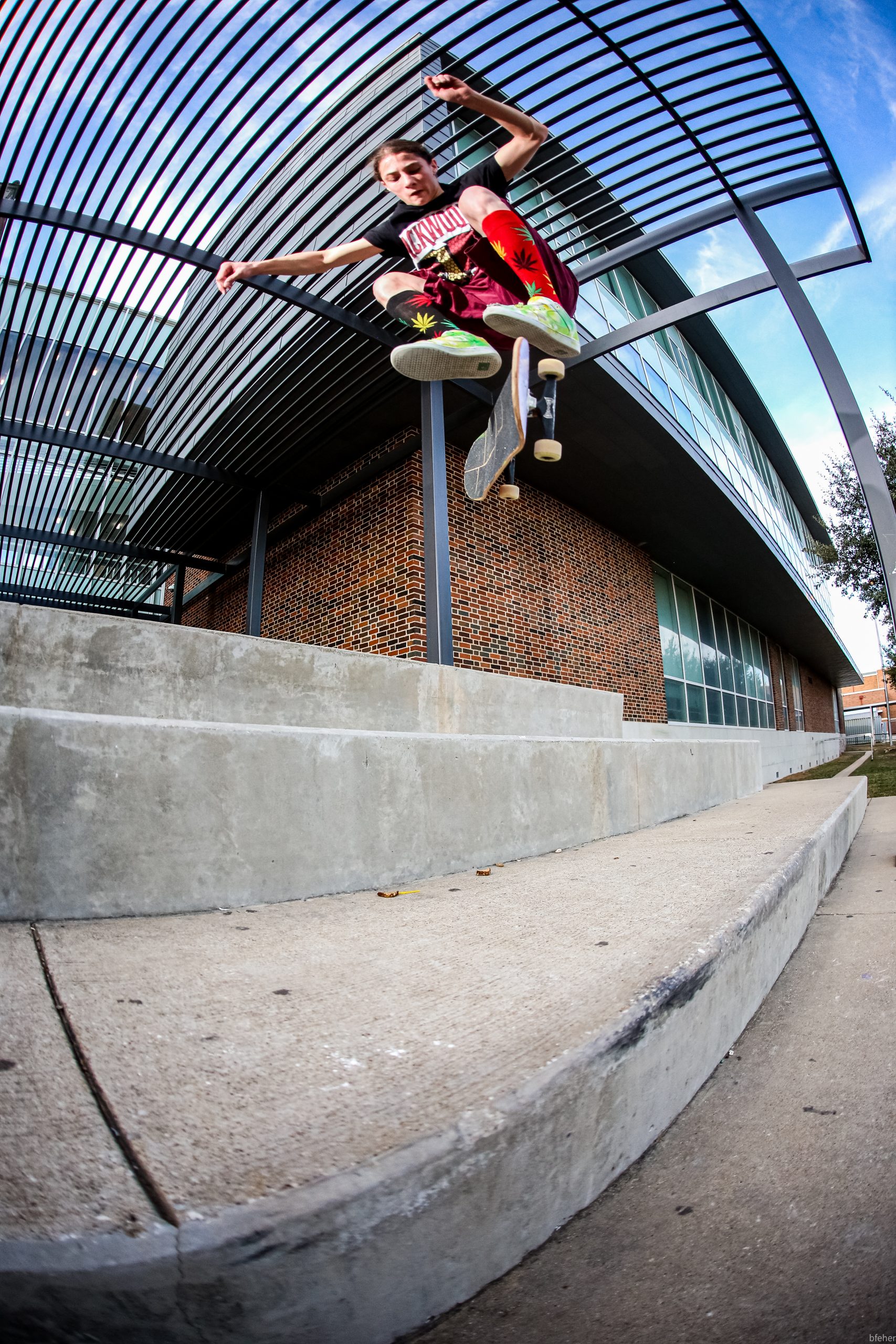 Here’s to hoping the victory blunt that Damian Tambourine smoked after landing this varial heelflip was indeed an actual Backwoods. The drip on this fit rates at a 420 out of 10. 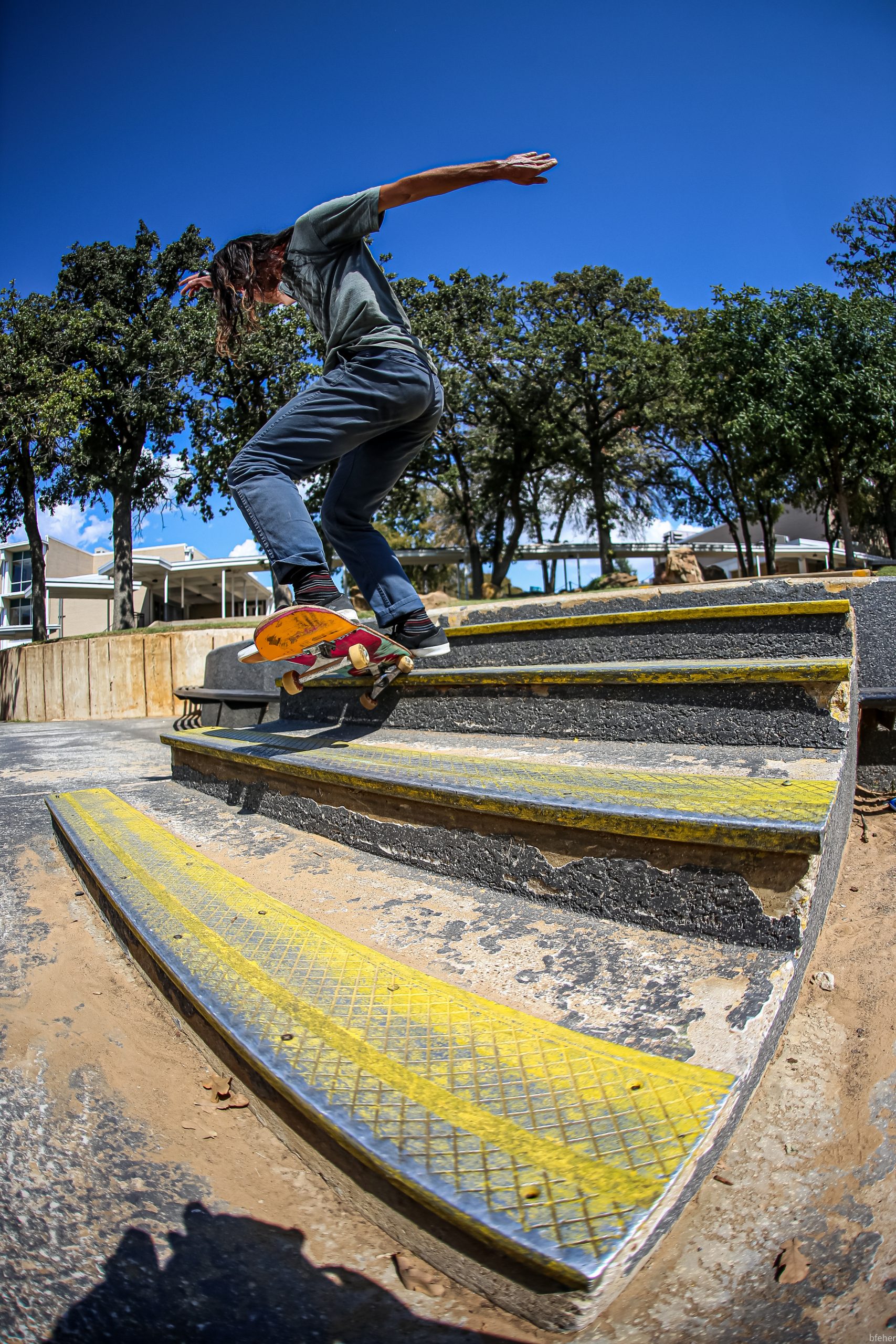 Sometimes on the outskirts of any city, you gotta make spots work in your favor. Blake Vaughn crooks through some crust beneath the blazing Texas sun. 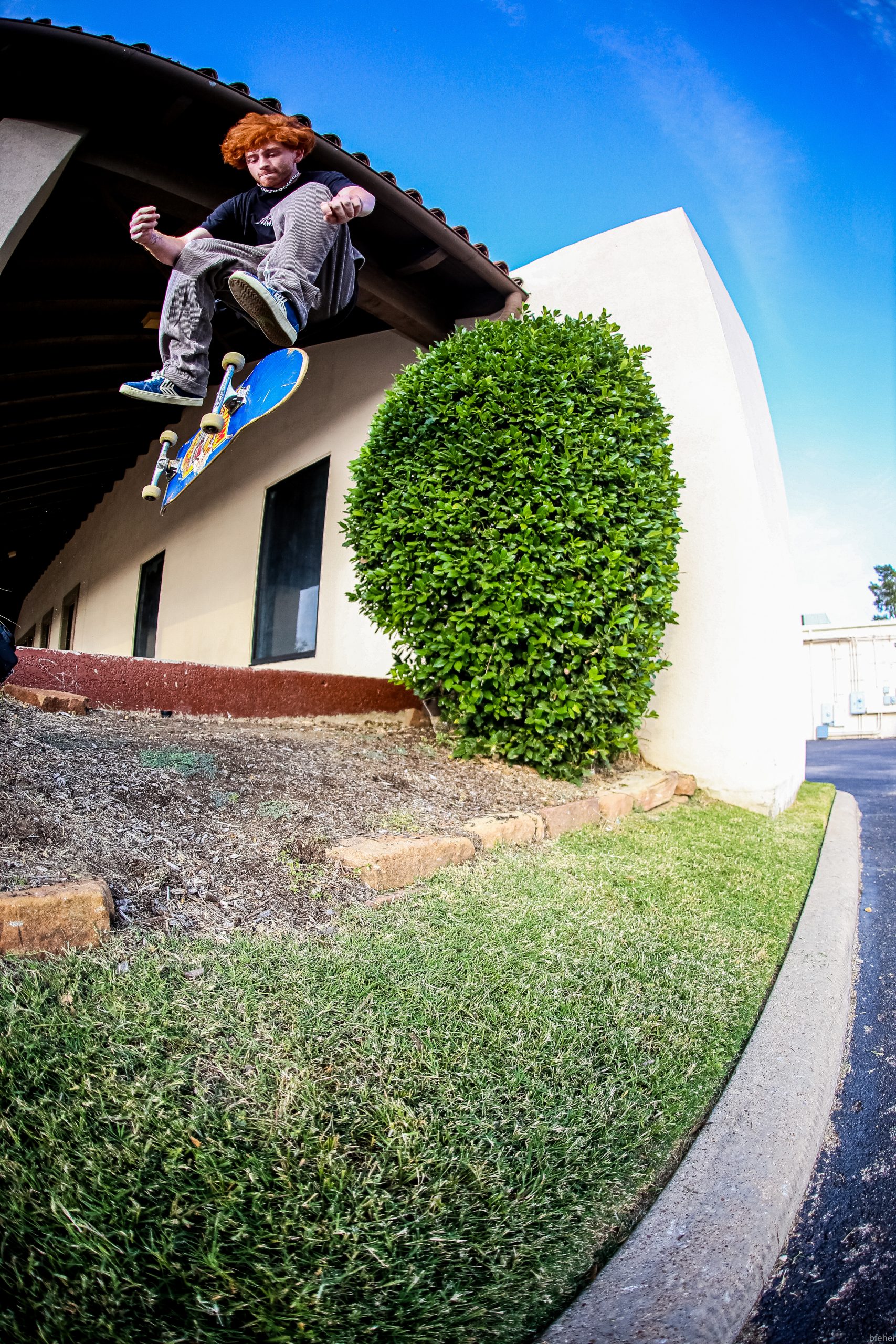 Color temperature is 100% perfect with this one. Judah Tollin busts a nollie heel to close out Bence Feher’s gallery proving the grass is still nice and green in the Dallas streets.