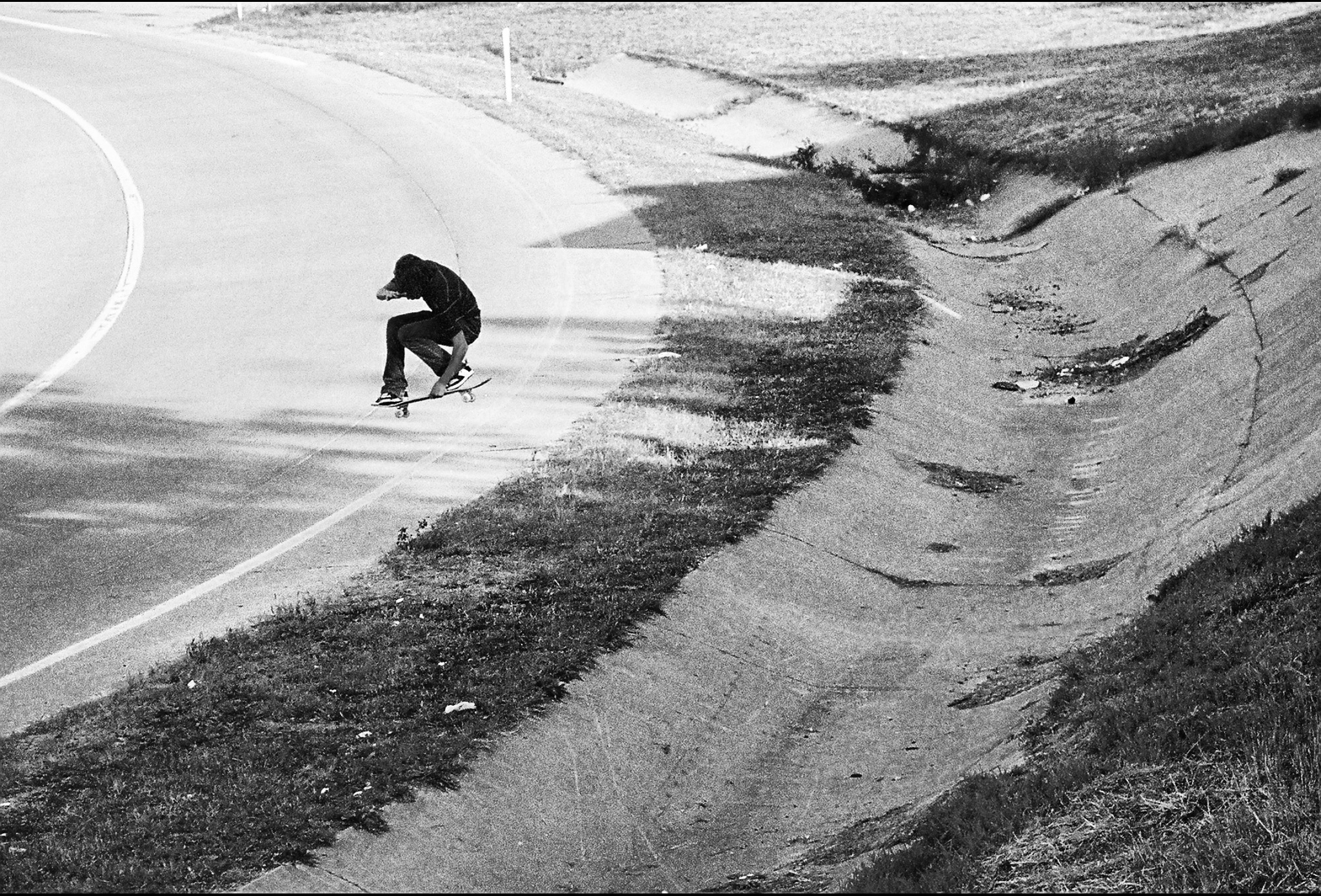 Joey Henry mostly travels with his music (The Calamity Cubes, Joey Henry’s Dirty Sunshine Club) and his photos, but for the last 20+ years he has been documenting skateboarding in the midwest.  Lowcard has always been supportive of his music, his zine (Clusterfunk), and travels and Magnethead encouraged him to submit stuff in the past. So here he is, in all his midwest crusty glory. May’s Low-Res features the work of Joey “Kansas” Henry. 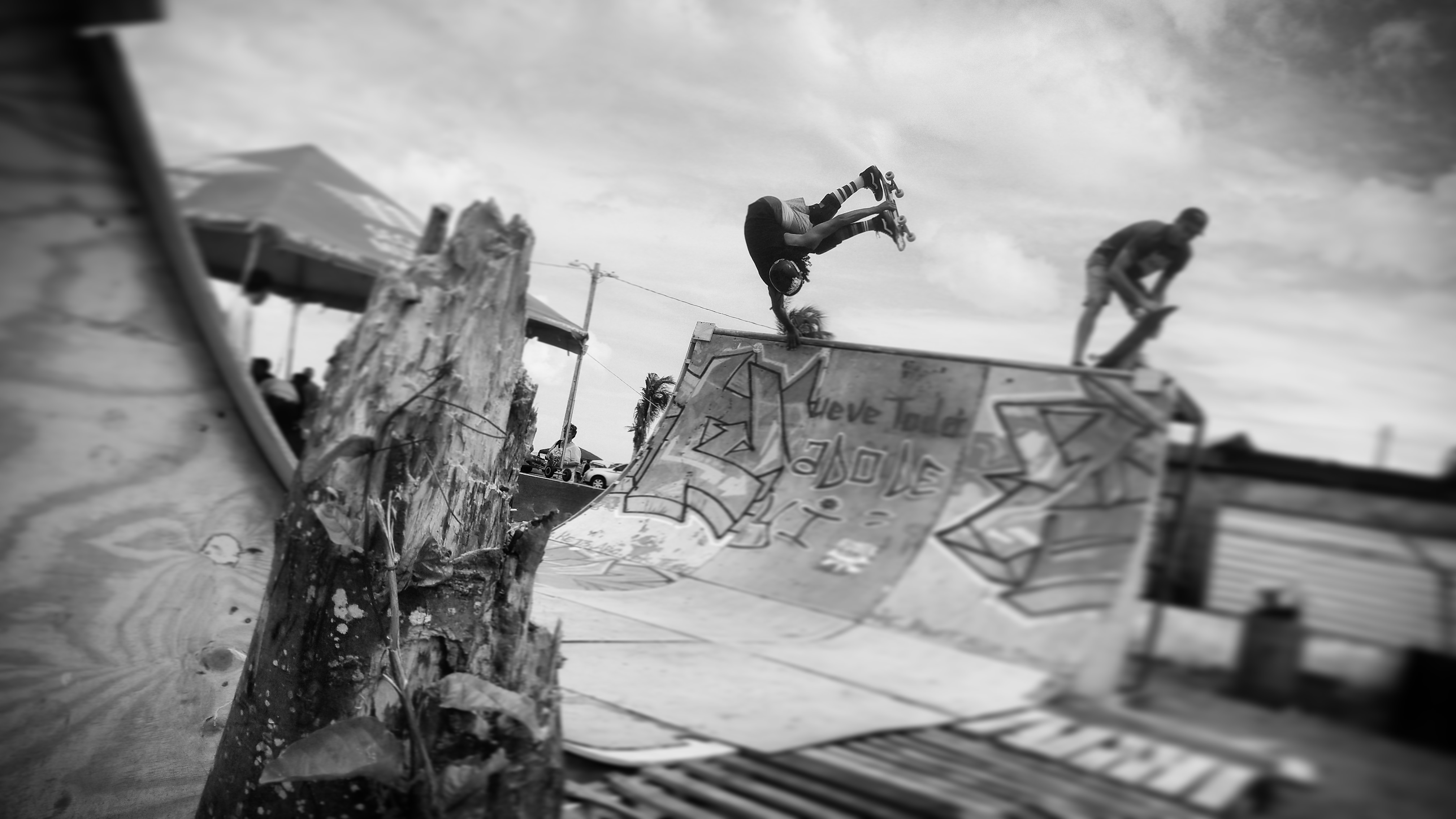 Puerto Rico’s skateboard king, Rey Davila, with his iconic handplant on this homemade mini ramp on one of the beautiful beaches in Naguabo. Representing Este Skates for life! 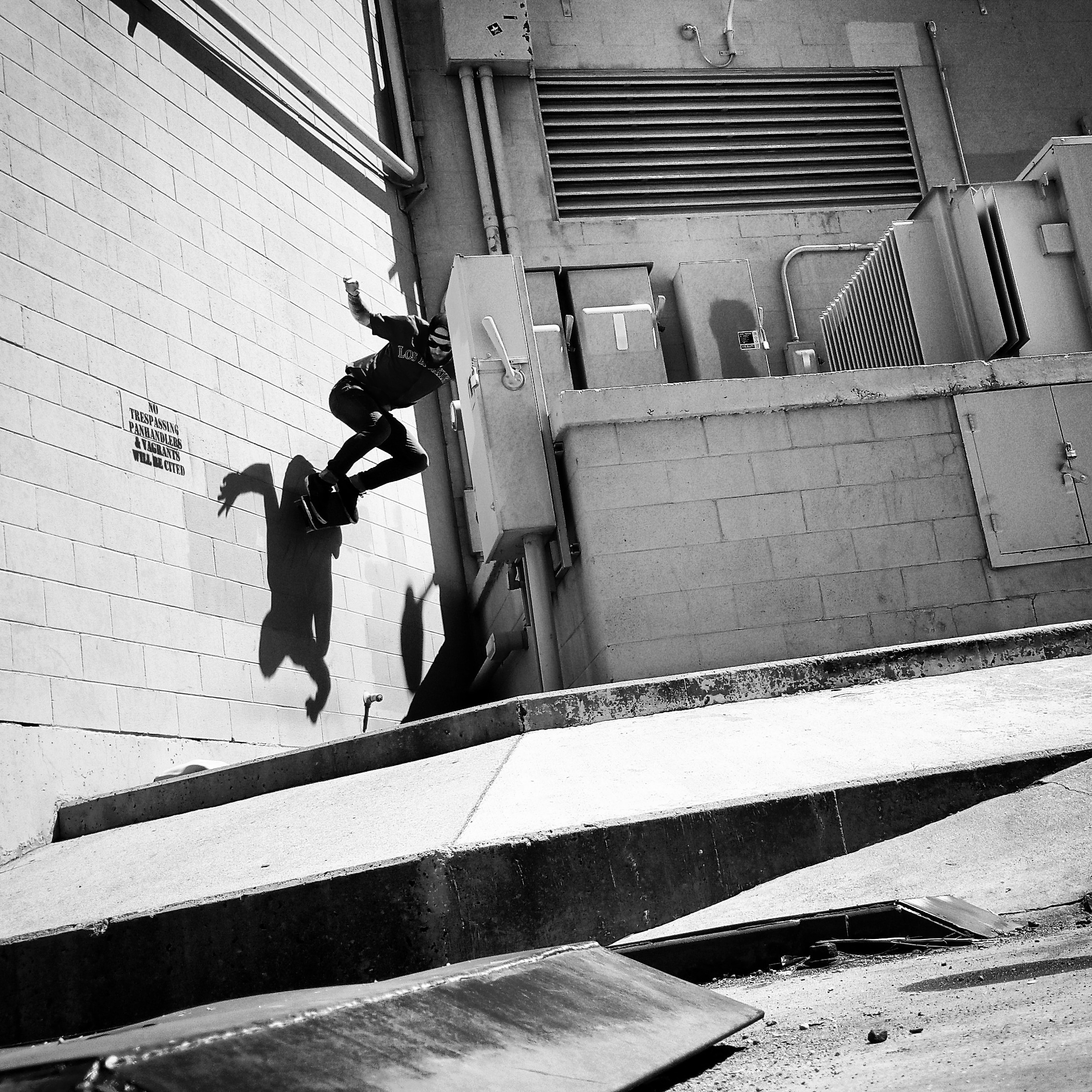 Matt Pennington is one of those skateboarders that can do anything he wants on his board. I’ve seen him casually hit the gnarliest rails with no cameras around just for shits and giggles. However, it’s his creativity and unique spot and trick selection that normally fuel his fire. Here he gaps out from the loading dock to the wall and into the danger zone. 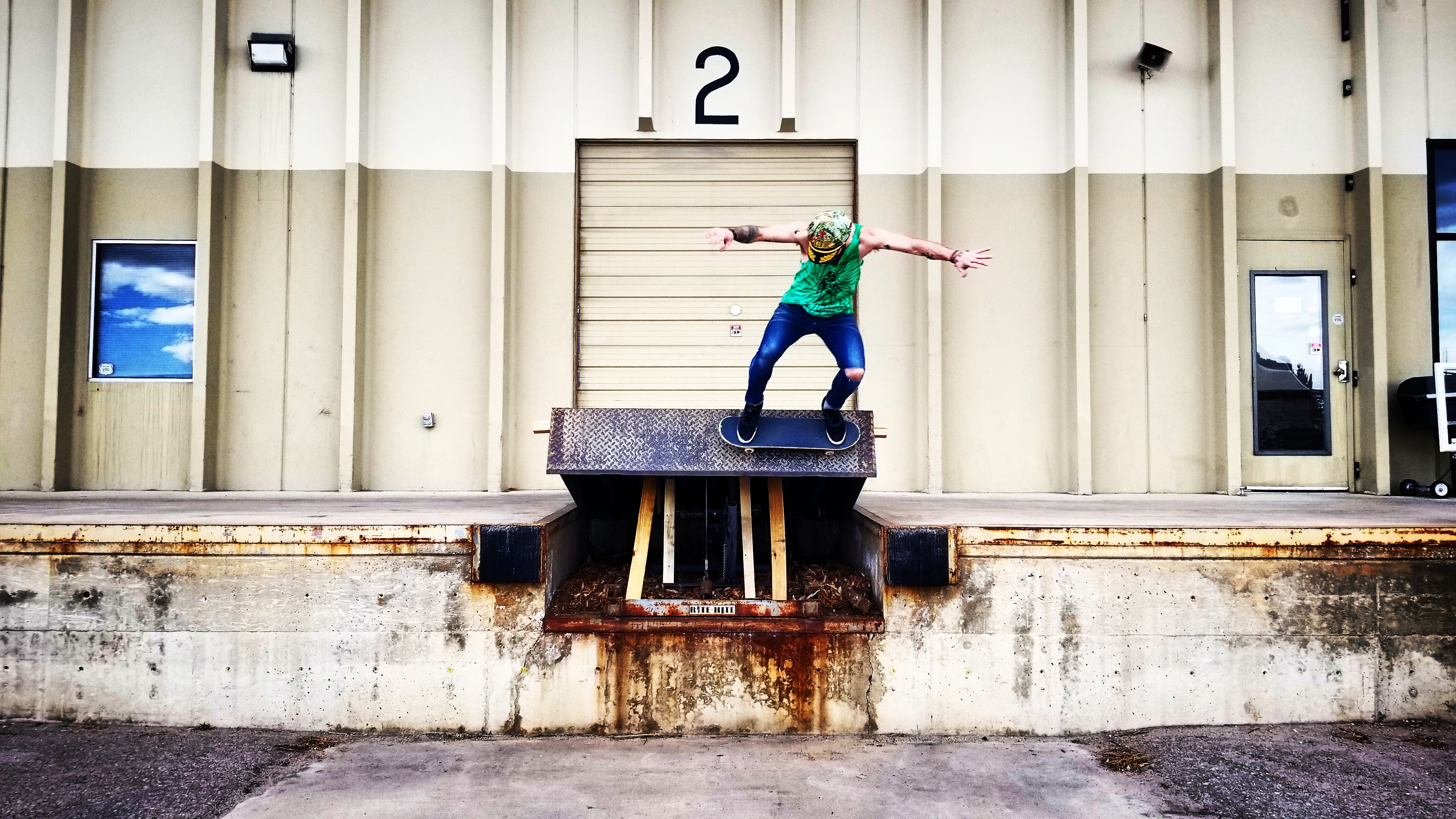 Another Matt Pennington wall ride. This time, he set up this sketchy loading dock and landed the shot from behind the backboard. Ft. Collins, CO 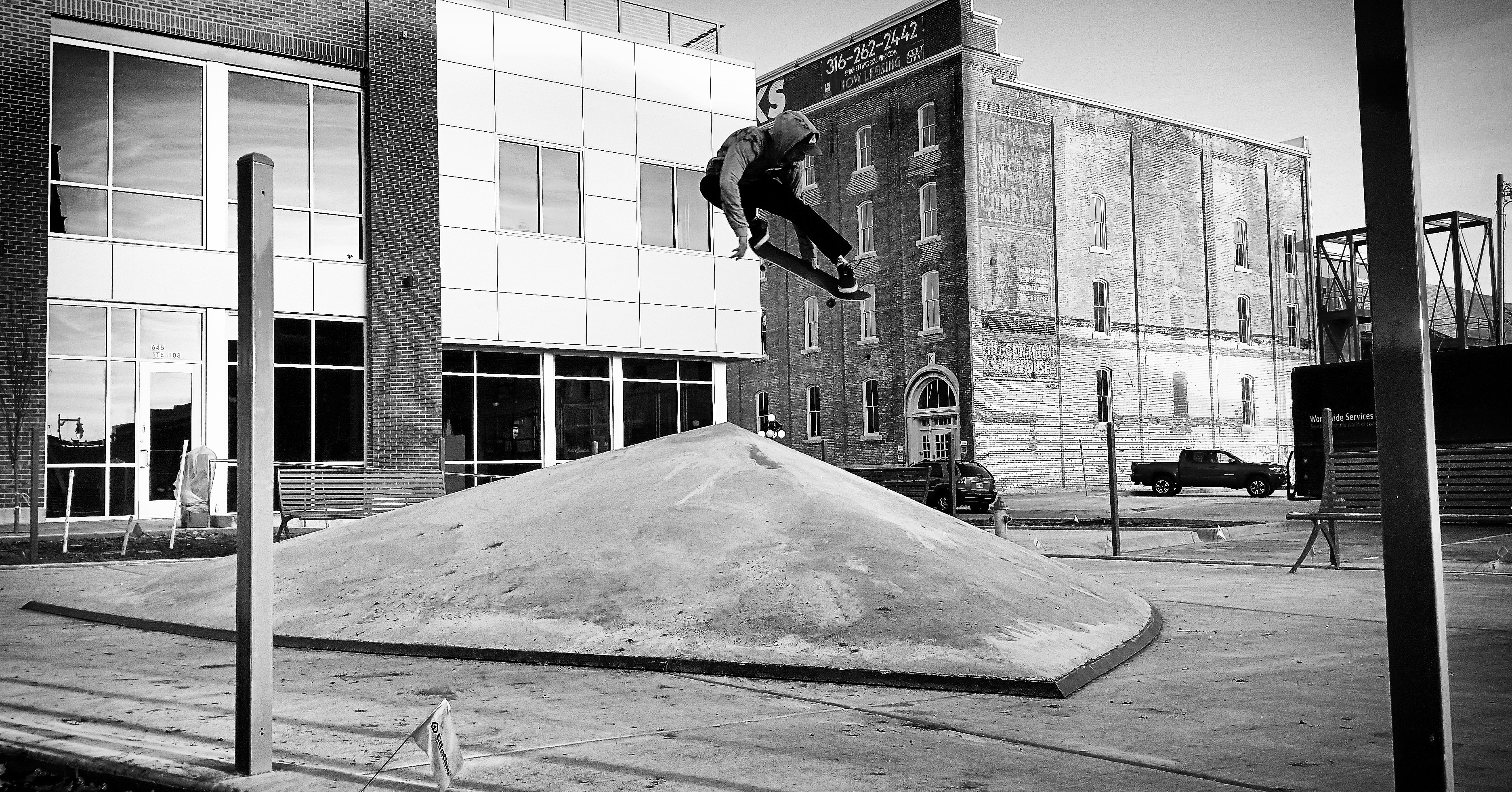 Wichita, KS skate wizard, Scott Fluty, with a text book melon grab on this amazing spot we called the Limited Edition Dog Park Pyramid. The city added a dog park downtown, so this pyramid was only skateable for two weeks before they added astroturf and fenced it in for the pups. Gotta love a limited edition skate spot. 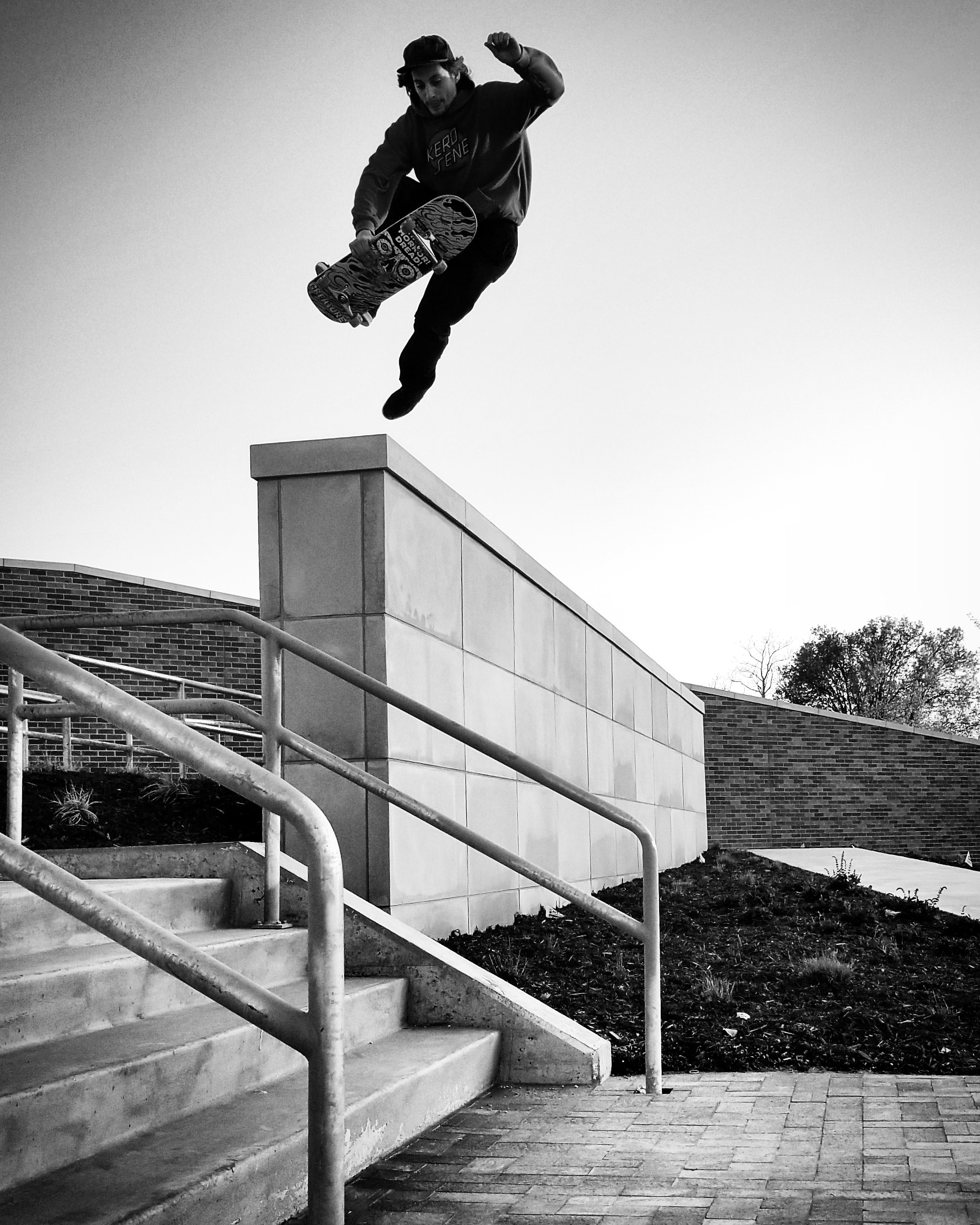 Tyler Feld is another Wichita ripper doing it for the love. He can do anything he wants on his board and always finds new ways to approach spots as they come and go. While most would hit the freshly created double set here at Wichita’s new minor league baseball stadium, Tyler decided to christen the new spot by being the first to jump off the wall towering over the aforementioned set of stairs. The spot was so new, the first time he went to the spot and tried this, he literally changed the level of the bricks he was landing on from jumping over and over. One heel bruise and a month later, he went back and nailed this boneless off the top ropes in a few tries. 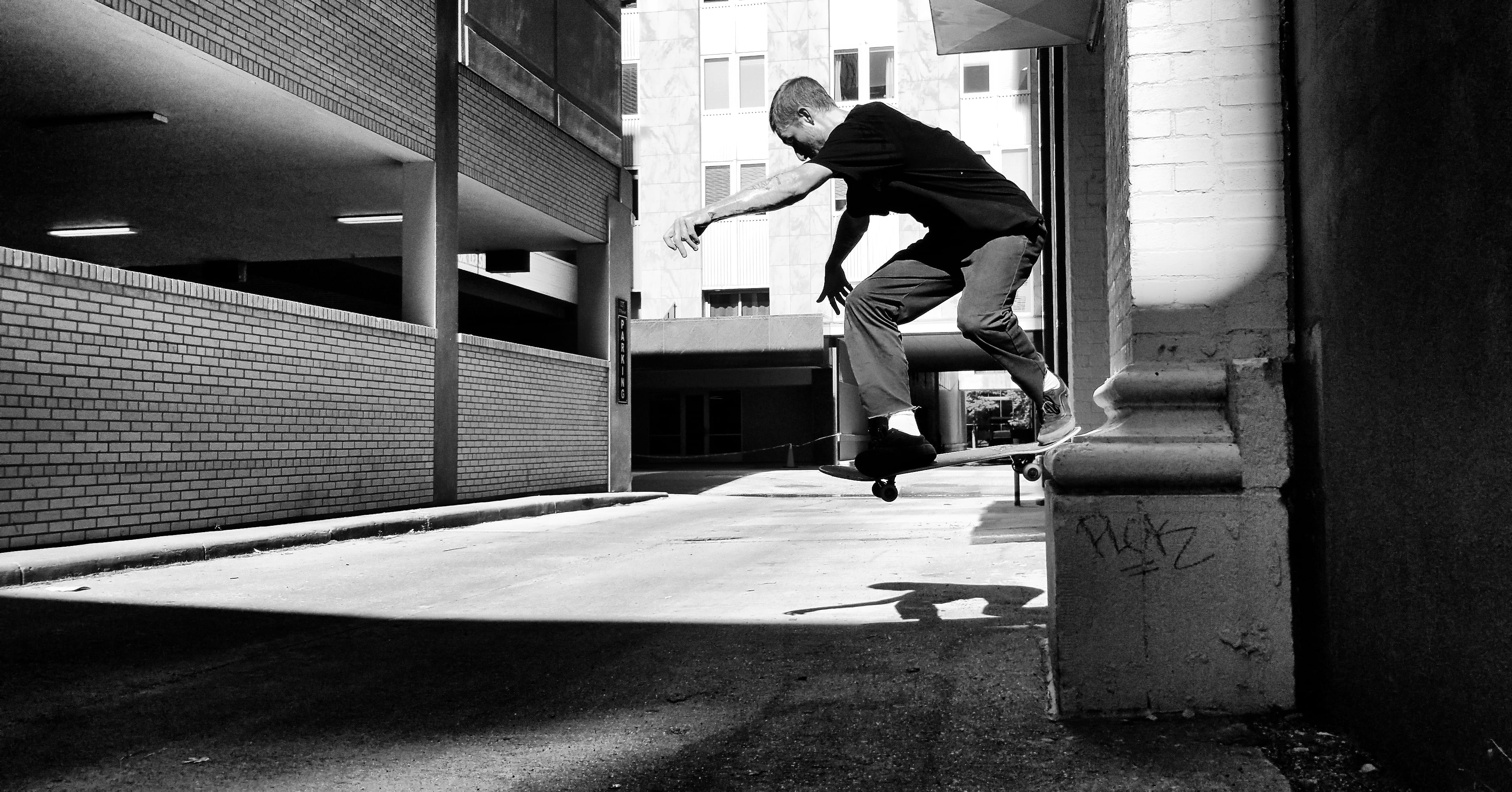 Style, speed and pop describe Wichita ripper, Brendan Himes to a T. Some folks’ skating does the talking for them. Brendan’s always down to go shoot and I never go home without a photo cause everything he does on a skateboard looks rad. One of my favorite photos of him is just a powerslide, but it’s like when you see someone with a proper push, it’s like watching poetry write itself. Here he takes a nollie back tail to a tall order in the alleys of downtown Wichita, KS. 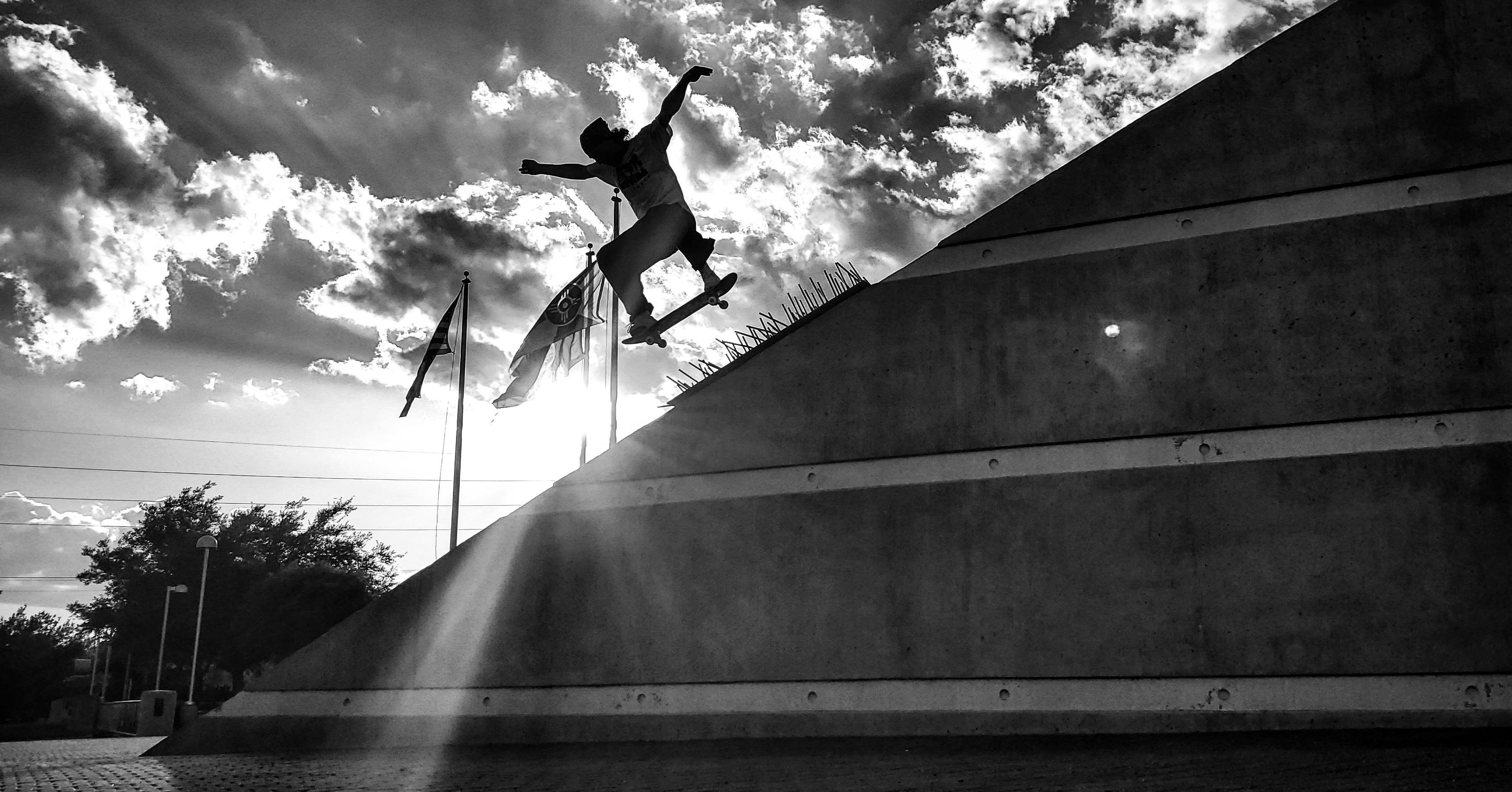 20 years ago, I watched Dennis Busenitz drop in on this monster from way up top (full height not shown here). Security was quick to kick us out, but not before asking if they could see the clip. Not long after that, these spikes showed up in an attempt to dissuade folks from skating and climbing on this unique piece of architecture which practically begs people to enjoy. Representing Kansas City’s lovely Skateboards, Sawyer Stevens said “Fuck yer spikes,” and etched himself into the Wichita skateboard history books with this full throttle death spike Ollie at the science museum. 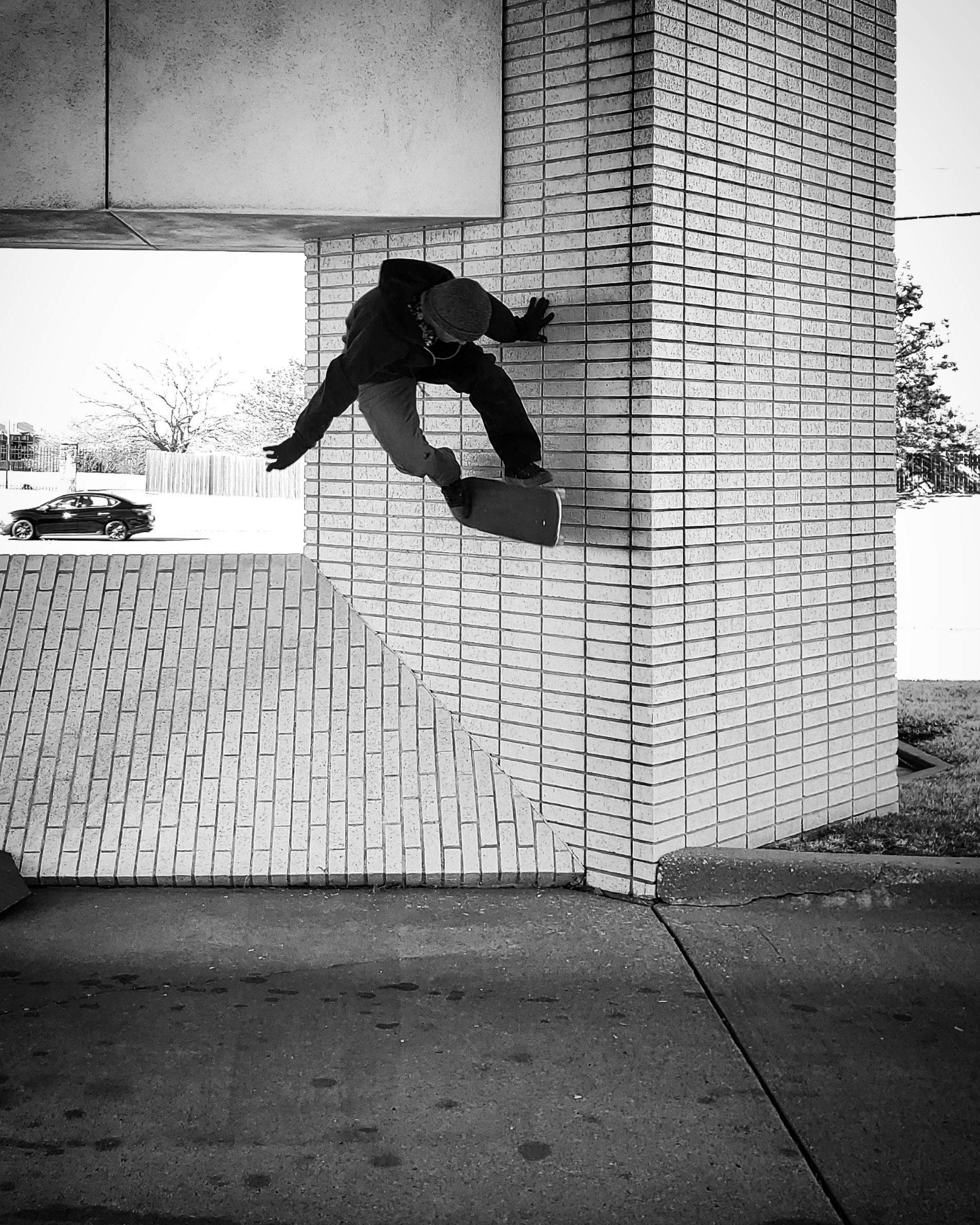 Cole Wyatt hails from the mighty Lawrence, Kansas. A true pillar to his skateboard community. Always stoking the fire and hyping up the sessions with the homies. He’d eyed this spot in Wichita for years and finally the time came for his conquest. It was a battle and he earned it. Wallride shove out on this bona-fide angular piece of crusty Wichita skateboard history. 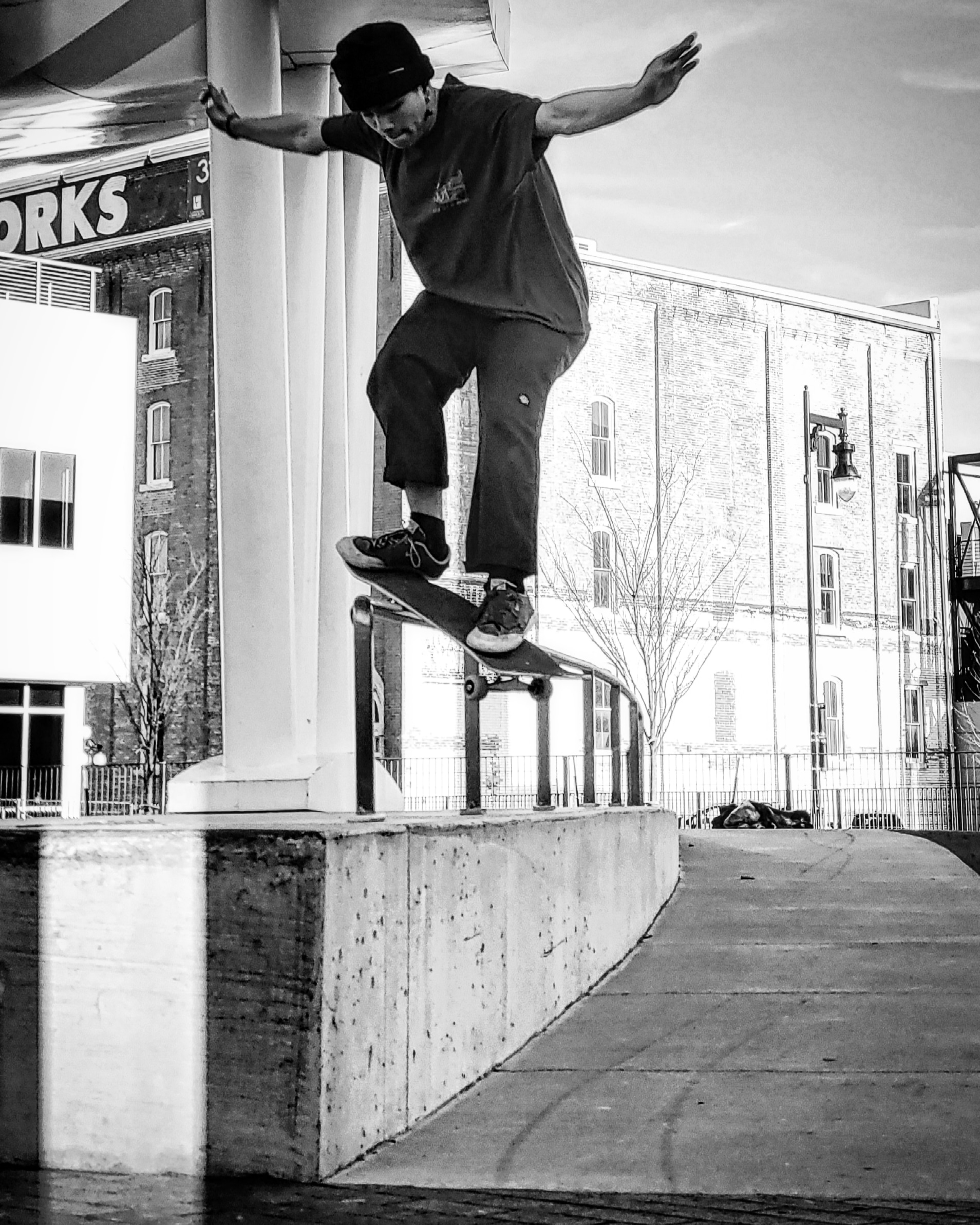 Lawrence, Kansas’ Calvin Spilker has style for miles and flow for days. I’ve only had the opportunity to skate with him a few times, but every time I’ve been blown away by the ease at which he casually destroys every spot in his path. On a recent trip to Wichita, he dropped some heavy tricks on spots old and new. Here’s one of the most nonchalant feeble transfers I’ve ever witnessed. 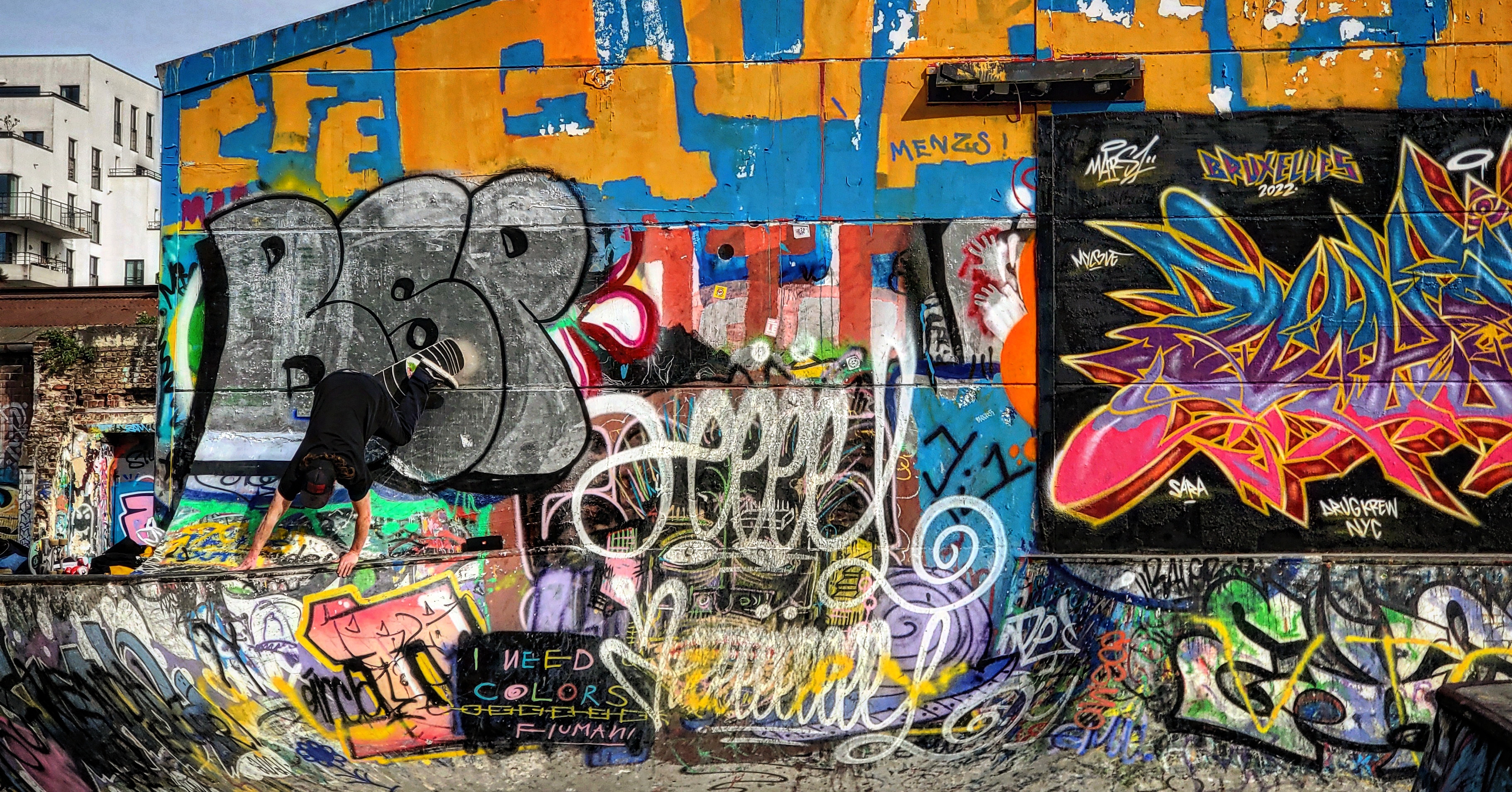 On a recent tour of Europe (with my music), I got to play a show at this DIY park in Brussels, Belgium. Everybody was shredding and having rad times. Matthias Demol helped build the bowl, arrange the show and threw down these gnarly double hand plant transfers off the vert wall. Good times were had all around, and those dudes are hard at work building the concrete parks of Belgium’s future.